As is now election tradition, political parties are taking turns to pitch their programmes to voters on national television. With most parties struggling to conduct campaign activities or get attention online, the reach that their guaranteed slots on state-run MRTV offers is made all the more important.

Disappointingly, though, most speeches have been lacklustre, devoid of new initiatives or ideas. It may not be entirely the fault of the parties. When the leader of one election contestant, U Aung Moe Zaw from the Democratic Party for a New Society, tried to impart some home truths about child poverty and land disputes in Myanmar, he claims the election commission censored those parts of his speech.

When Daw Aung San Suu Kyi got her turn on September 17, it seemed like she would deliver up more of the same reassuring, if vague, messages about the NLD’s commitment to a democratic federal union via constitutional change and improving the lives of the people.

That was all there, of course, but one moment in her speech provided the colour that many other party pitches lacked.

She used the metaphor of an ooyin, or garden, to describe her party’s ambitions for the country and the challenge it has faced since taking office. The garden – that is, the country – had been “neglected for many, many years”, she said, describing it as “a patch of ground ugly and dangerous with pits and hollows, rocks and sand, weeds and thorns, worthless trees and broken fences, a casualty of bad weather, bad methods, indolence and other ills. Much effort is needed to transform such a place into a safe, beautiful, valuable garden.”

Despite the unusually vivid language, it was a fairly standard critique of military rule.

But then, later, she said the “greatest need for our garden is security. We must make our fences strong and safe against external predators, men and animals. The most effective, safest bulwark for the defence of the garden that is the Union of Myanmar is our unity.”

Moving into the real world, she spoke of “tangible defences” and her government’s decision to provide K20 billion in funding for a wall along the country’s western border with Bangladesh. In this rhetoric, it’s hard to ignore parallels with another larger-than-life leader who faces an election in November, albeit on the other side of the world. But “more profound and challenging” than building a wall, Aung San Suu Kyi said, is the intangible, invisible task of defending our country in the international arena”.

Myanmar has faced challenges responding to the situation in Rakhine State but been met with “criticism and pressure, rather than understanding, sympathy and help”. “Why is this?” she asked. “It is because, basically, there are few who know or wish to know, our country well. There are few who wish to learn about our country.”

The message, essentially, is that Myanmar has no reason to apologise or atone for what happened in 2017, when the military’s clearance operation drove almost 750,000 Rohingya into Bangladesh, and an unknown but substantial number were killed, injured and/or raped. The rest of the world is at fault for not showing Myanmar sympathy and not understanding the country enough.

There is certainly a kernel of truth here. The pace of the early reforms in Myanmar in 2011-12 made many too optimistic and created unrealistic expectations. After events in Rakhine in 2016-17, international sentiment towards Myanmar’s transition arguably shifted too far the other way. The events in Rakhine should not be ignored, but they should not be the only lens through which the country is viewed.

But Aung San Suu Kyi’s election address through state media doesn’t just present Myanmar and its government, perversely, as the real victims of the Rohingya crisis, it also contradicts what she is trying to tell the rest of the world. At the International Court of Justice in December 2019, she acknowledged that some atrocities had taken place and insisted her government was taking important steps to hold perpetrators to account and improve conditions on the ground for the Rohingya. Her request was for the international community to give Myanmar time and space to make good on its promises.

It’s a fool’s game to try and guess which message Aung San Suu Kyi believes – and it doesn’t really matter. But this national address was an important opportunity to begin lifting the siege mentality that has descended over Myanmar society in the past three years. Unfortunately, this opportunity was missed, like many before it. The National League for Democracy leader instead doubled down on her government’s long-held strategy of insisting the world just doesn’t understand, and that the public needn’t trouble themselves with reports of atrocities.

The conflicts in Rakhine are indeed complex, and it will likely be a decades-long project to bring peace, justice and development to the state. Speeches like this one do not move Myanmar closer to that goal. 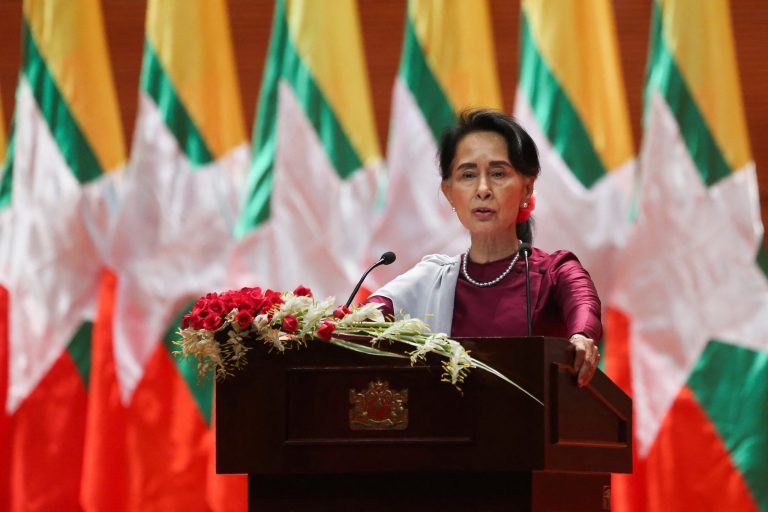 Ousted Myanmar leader Daw Aung San Suu Kyi skipped the resumption of her coronavirus-delayed trial in a junta court because she felt ill, her lawyer said Monday.
BY AFP