A week of extremist anger ends with arrests

Eight activists are in custody following a violent clash with residents in Mingalar Taung Nyunt Township on the night of May 9, while several others – including prominent monks – remain at large.

A WEEK of high tension between Buddhist extremists, the authorities and Yangon residents has ended with the arrest of several nationalist leaders and other key figures on the run.

Warrants were issued for seven people on May 11 under section 505(b) of the Penal Code in relation to a confrontation between police, Buddhist nationalist activists and residents of Mingalar Taung Nyunt Township.

Four had been detained as of May 15, with two handing themselves in that afternoon. Police are still searching for the remaining three: prominent monks U Thu Seitta and U Pyin Nyar Wuntha, who are both members of the hardline Patriotic Myanmar Monks Union, and a civilian, U Myat Phone Moh.

Section 505(b) relates to making, publishing or circulating any statement, rumour or report “with intent to cause, or which is likely to cause, fear or alarm to the public or to any section of the public whereby any person may be induced to commit an offence against the state or against public tranquility”. It carries a potential two-year prison term.

Thu Seitta and Pyin Nyar Wuntha are also among a separate group of seven that is facing charges under 505(b) and section 19 of the peaceful protest law, in relation to a demonstration outside the US embassy in April 2016.

They had been granted bail at the first hearing in Kamaryut Township Court on April 28. But at the second hearing on May 12 the judge refused an application from four defendants – including Myanmar National Network chairman U Win Ko Ko Latt – to extend their bail and they were remanded in custody.

The three remaining defendants – Thu Seitta, Pyin Nyar Wuntha and another prominent monk, U Parmaukha – were not in court on May 12, but have been ordered to appear at the next hearing, scheduled for May 26. Should they appear they are expected to also be remanded in custody.

The arrests and denial of bail constitute the strongest response yet from the authorities to the provocations of the nationalist movement, which many argue is simply a front for anti-Muslim activities.

Following the arrests, the nationalist group Ma Ba Tha – known in English as the Association for the Protection of Race and Religion – issued a statement on its Facebook insisting it had not been involved in the unrest.

It also announced that it would hold a press conference at its headquarters in Yangon’s Insein Township on May 16.

The violence in Mingalar Taung Nyunt was sparked by a raid on an apartment on May 9 that was apparently aimed at finding “illegal” residents from Rakhine State.

Police even took the unusual step of firing into the air to disperse angry residents in the early hours of May 10.

The incident erupted after immigration and police officers, together with monks and nationalist activists, entered an apartment on Naung Yoe Street, between 122nd and 123rd streets, at about 10pm.

Their aim, they said, was to find stateless “Bengali” Muslims from Rakhine State in the apartment. They said the owner was giving sanctuary to the Muslims, who identify as Rohingya and are not allowed to leave Rakhine State without official permission. 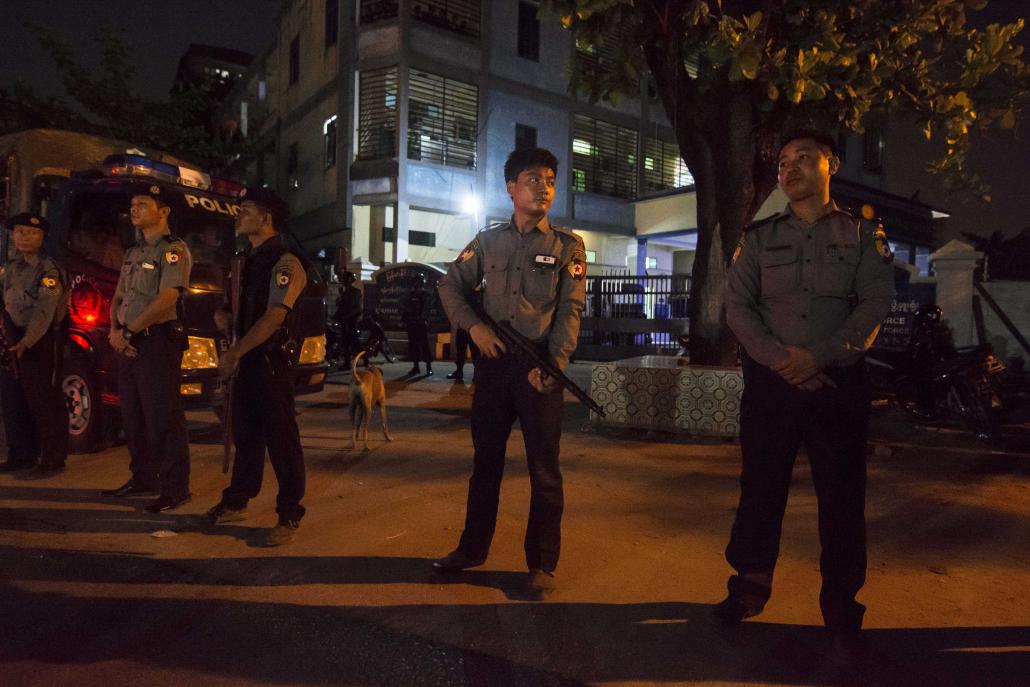 However, the search did not turn up any illegal residents. After checking the identity documents of those living in the apartment, they returned to the street, where a melee soon broke out.

It was the second incident involving extremist Buddhist nationalists in 11 days. On April 28, they pressured authorities in Anawmar 1 Ward, Thaketa Township, to shutter four Islamic schools on the grounds that they were also serving as places of worship.

There is a link between the two incidents. On both days, nationalist leaders appeared in court facing charges under section 505(b). On both days, the incidents occurred after the court appearances had concluded.

The charges stemmed from a protest outside the United States embassy a year earlier.

U Wirathu and dozens of extreme nationalists attended the court on April 28. When the hearing ended at about 3pm, their supporters travelled together across town to Tharketa.

They demanded to shut four Islamic schools that they said were also being used as a place to worship. Eventually the authorities acceded to their demand and closed the madrasas.

On May 9, Win Ko Ko Latt and two other nationalist leaders, Ko Phoe Thar and Ko Naungtaw Lay, appeared in Bahan Township Court, where they are also facing a charge under section 505(b). Like the previous incident, their supporters attended court, this time wearing T-shirts reading “No 505(b)”. The judge confirmed bail and fixed the next court date for the last week of May.

Prior to the court appearance, members of nationalist groups spread messages on social media saying that “a bigger movement than Thaketa is coming”.

After the court hearing, they set their sights on Mingalar Taung Nyunt.

At 10pm, about 50 people including monks arrived in five light trucks in front of the building at 105-107 Naung Yoe Street. Four policemen, some immigration officers and about five nationalists entered an apartment on the eighth floor.

The apartment is owned by Daw Win, 47, a real estate broker. “They said nothing – just shouted at us to get out of our rooms and show our ID cards,” she told Frontier. “My nephew searched our lockers but couldn’t find them. Then I found our ID cards and household list and showed them. Then they left.”

Daw Win said she recognised two of the civilians who entered her apartment, one of whom she had recently argued with over a broker fee. The man had demanded K1 million from her, she said.

“He threatened me many times. Then we negotiated for me to pay him K300,000, which I did in front of the ward administrators. But he was not satisfied and then tonight they [nationalists] came to my apartment,” she said. 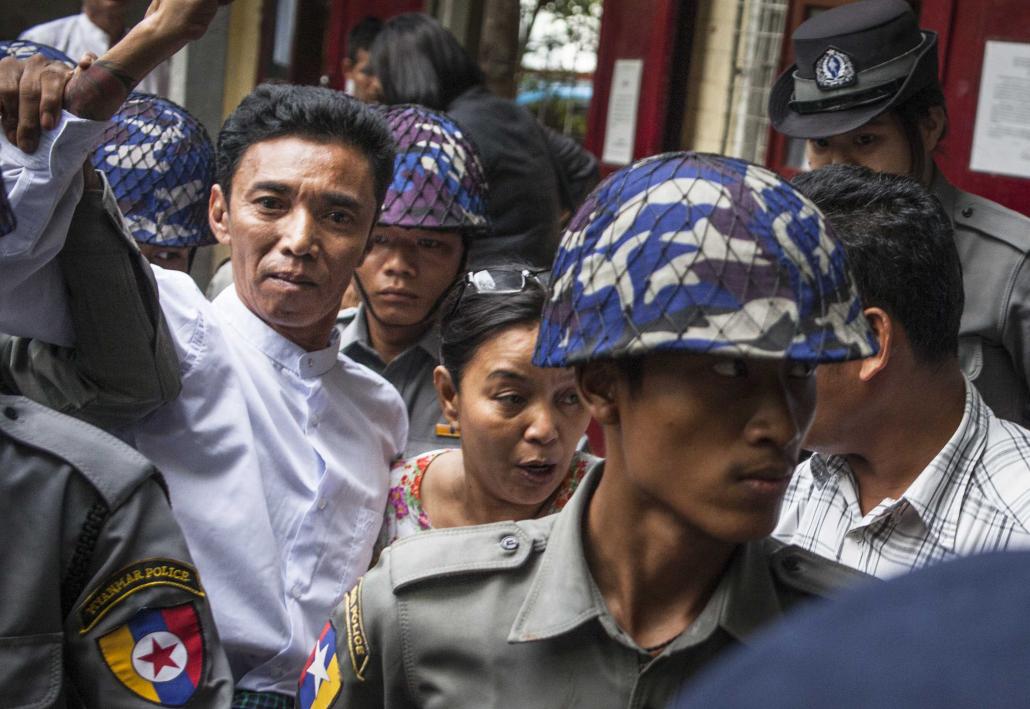 Ko Latt and wife Ma Aung Aung Myint are escorted from Mingalar Taung Nyunt Township Court on May 12 after being remanded in custody. (Theint Mon Soe aka J | Frontier)

When the group entered the building, about 20 people waited at the rear of the building, ward administrator U Soe Myint told Frontier, possibly to stop any illegal residents from slipping away.

After the search ended without success, monks, activists, policemen and immigration officers gathered under the portico of the building, where residents had gathered to watch. They shouted, “Go away, stay away,” according to witnesses.

Fighting soon erupted between the nationalists and the residents. One resident, Ko Zarni Maung, was beaten seriously in front of the policemen, who did nothing to intervene. A taxi driver took him to Yangon General Hospital for treatment, witnesses said.

When the nationalists and policeman left the scene, residents threw stones, empty bottles and sticks at them, before both groups ran away from the area.

Then the nationalists gathered in front of Mingalar Taung Nyunt Police Station. Police Colonel Myo Swe from the Yangon Region Police Force’s information unit – who had also been present at Thaketa on April 28 – met the leaders of the group and asked them to return to their monasteries and homes.

However, one light truck drove around the area, its passengers calling out insults. At about 1am, the residents of the area around 122nd Street gathered again and threw empty bottles and stones at a police car, prompting officers to fire two shots into the air. At about 2am the situation had returned to normal.

Before news of the arrest warrants became public, Thu Seitta and Pyin Nyar Wuntha were among a group of Buddhist nationalists who pledged to stop acting as vigilantes – but only if government staff agreed to begin enforcing the law.

Prominent Buddhist nationalist leader U Parmaukha and several other supporters of the nationalist cause made the promise at a press conference on Thursday, called to discuss the events in Mingalar Taung Nyunt.

Parmaukha claimed that monks and nationalist activists had been forced to undertake law enforcement because the police were “working together with the gangsters”. 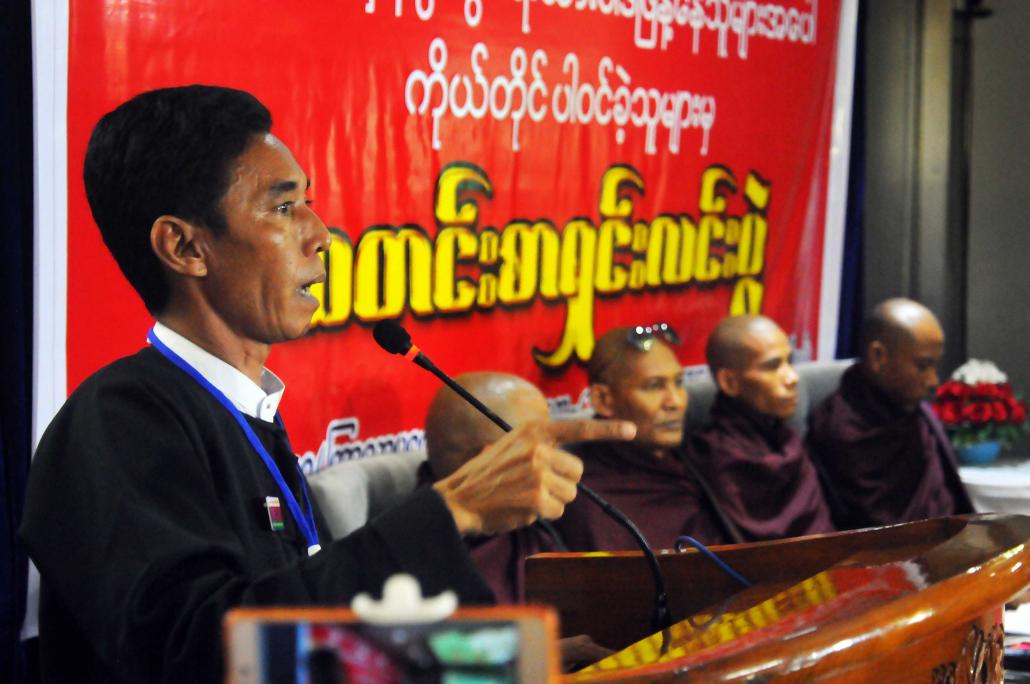 From the stage at City Star Hotel in downtown Yangon, Parmaukha asked his supporters in the audience: “If the police, legal officials, judges and immigration officers promise that they will work according to the law and avoid corruption, we will promise not go to police stations and courts in the future. Won’t we?”

His supporters, mostly members of the Patriotic Myanmar Monks Union, responded twice: “We dare to promise.”

Many had been involved in the confrontation with Muslim residents in both Mingalar Taung Nyunt and Thaketa.

PMMU secretary U Thu Seitta said the organisation received “at least” one complaint a day because the police and legal system “are not reliable”.

Regarding the raid in Mingalar Taung Nyunt, activists said at the press conference that they had received “exact” information that “Bengali” Muslims – most of whom identify as Rohingya – had been living illegally in the area. They said that the confrontation occurred because the police “did not take sufficient action”.