A refuge of monastic discipline in Mandalay

Disciplined decorum is a distinguishing feature of a monastery at Amarapura that is well known for requiring its monks and novices to rigorously observe the rules of monastic conduct.

HUNDREDS OF monks and novices are walking side-by-side in a long, silent procession along a wide lane, eyes downcast and clasping black offerings bowls. The lane is lined with tamarinds and other big shady trees common in central Myanmar.

About 100 tourists of all ages and nationalities have gathered under the shade of the trees. Nearby, on tables at the entrance of a dining hall are large aluminium tubs of food. As the monks and novices quietly accept their late morning meal, offered by donors, the tourists take pictures.

The sight of such a large number of monks gathered together in a quiet and orderly manner is rare, even in a Buddhist country such as Myanmar. It is the main reason why the Mahagandayon Monastery, at the former royal capital of Amarapura, just south of Mandalay, has been a famous sarthintaik, or Dhamma school, for more than 100 years. The monastery has become a destination for foreigners interested in seeing how Myanmar has perpetuated Theravada Buddhism for thousands of years. “Because it is the rainy season, there are not so many foreign tourists,” said U Ghanda, 32, a monk on the teaching staff at the monastery, where he has lived for 19 years. “In the open season when the monsoon is over, there will be at least twice as many tourists.”

The Mahagandayon Monastery was established by Agati Thukha Sayadaw and become famous after the Venerable Ashin Zanakabivumsa began living there in 1914 and rigorously enforced the Vinaya, the code of monastic discipline that consists of 227 rules for ordained monks.

The late Sayadaw Ashin Zanakabivumsa wrote and published more than 80 books on Buddhism. A distinguished lecturer of the Dhamma, he also prescribed a course of study for teaching Buddhism. The sayadaw worked untiringly for the purification, perpetuation and propagation of Theravada Buddhism until he died in 1977, aged 78. 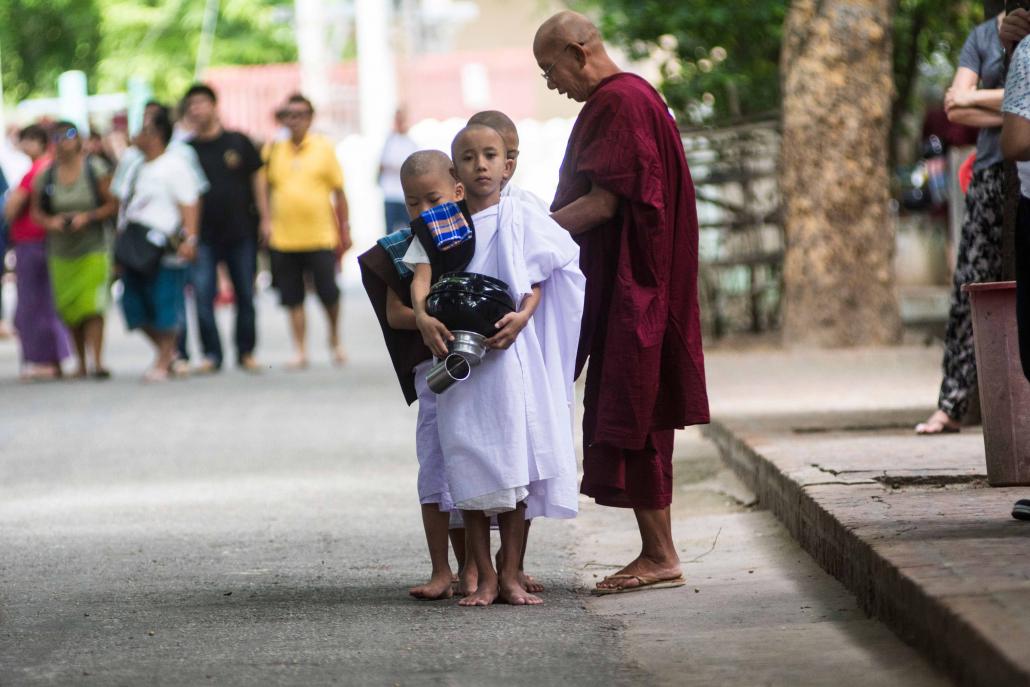 In line with the prescriptions of the Vinaya, he lived a simple, austere life. His home at the monastery was a small, one-roomed bungalow overlooking Lake Taungthaman, spanned by the famous teak bridge named after U Bein. A flight of seven steps leads to a verandah around the building, and you can see inside through its eight windows. The room is well ventilated and enjoys natural light all day.

On the walls are photographs of the sayadaw.

The bungalow has not been changed since the sayadaw died, apart from a new floor to replace one eaten by white ants and a new roof. “All the rest is in its original state when the sayadaw died,” said U Zawtibala, a monk who looks after the building. 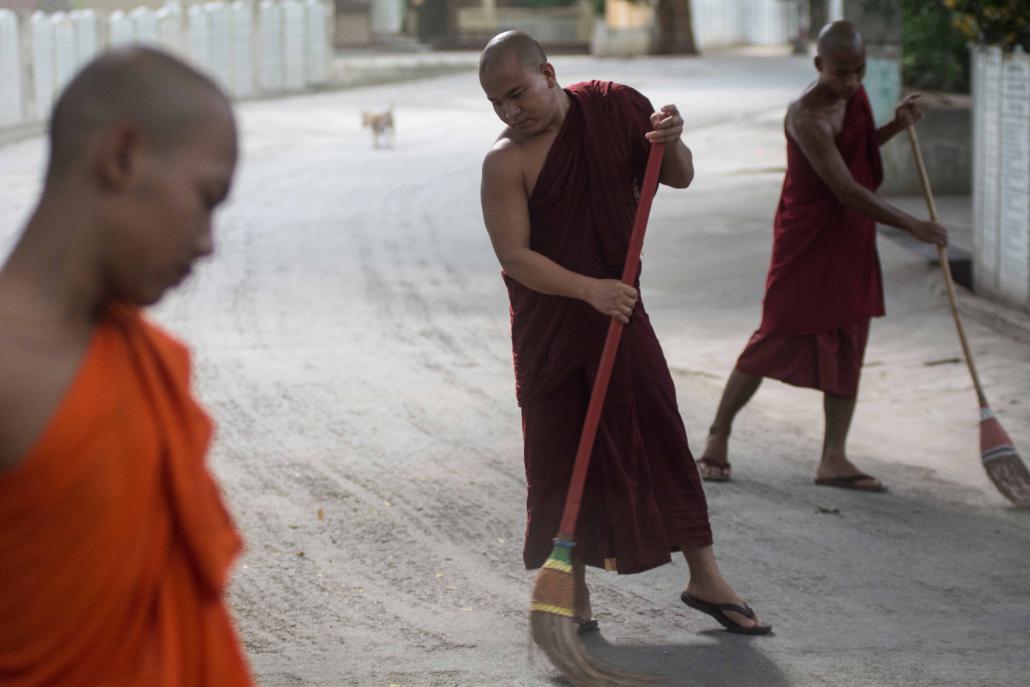 One of the sayadaw’s most distinctive possessions was an unusually tall table that he used for writing. Predating the recent trend by more than half a century, the sayadaw preferred to write standing up.

A legacy of the sayadaw’s strict enforcement of the Vinaya at Mahagandayon Monastery is the quiet, calm and orderly behaviour of its monks and novices, who are regarded with respect and admiration by visitors.

The daily routine at Mahagandayon starts with the pre-dawn beating of an ohn-maun, a drum made from a hollow log, at about 4.30am to wake monks and novices sleeping in more than 120 buildings throughout the 12-hectare (30 acre) monastery compound. Shortly after, monks leave the compound for their alms round in nearby villages. Their daily program also includes keeping the monastery compound clean and tidy, study, lunch, more study, rest, meditation and sleep. The routine is unchanged from when the sayadaw died 39 years ago. 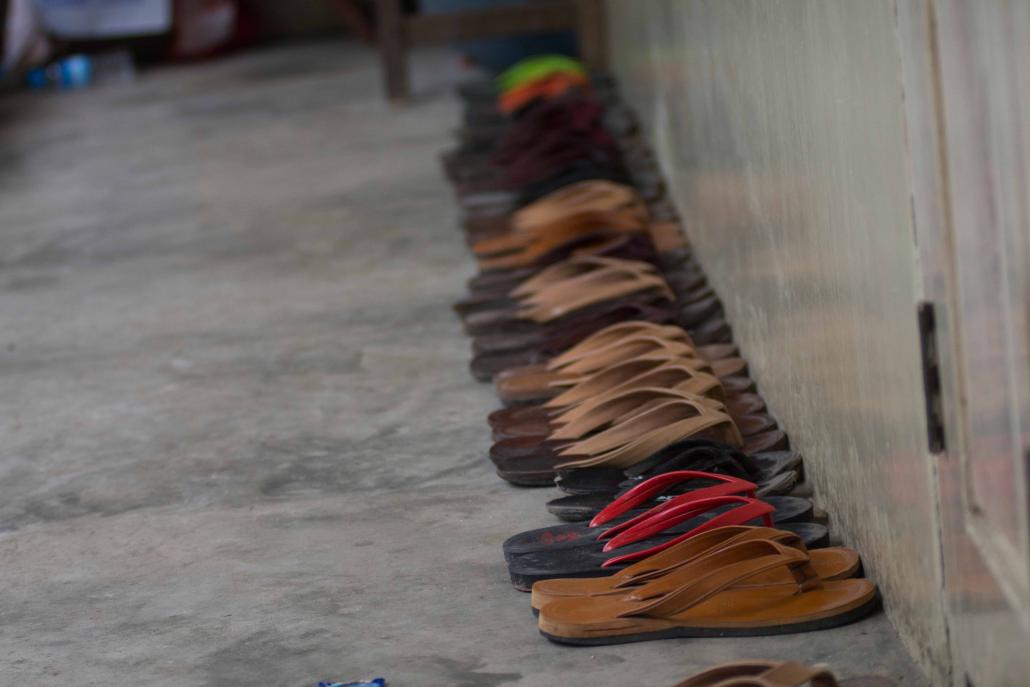 Monks’ slippers lined up outside a doorway. (Teza Hlaing / Frontier)

The sayadaw required monks and novices at the monastery to follow 10 rules. In order of importance they are:

1. To have a noble mind (attitude)
2. To respect the Vinaya
3. To be healthy
4. To practice personal hygiene
5. To wear robes properly and to eat properly
6. To behave with decorum
7. To speak with decorum
8. To know where to go and where not to go
9. To maintain discipline
10. To achieve high grades in learning

“Although there have been some changes in a monk’s way of life because of modern technology, there has been no change here in the emphasis on maintaining discipline,” said the Nayaka Sayadaw Abhidhaja Maha Rattha Guru Eindra Basabivansa, the monastery’s fourth abbot since Sayadaw Ashin Zanakabivumsa.

“Any monk who violates the code of discipline is expelled,” said the abbot. 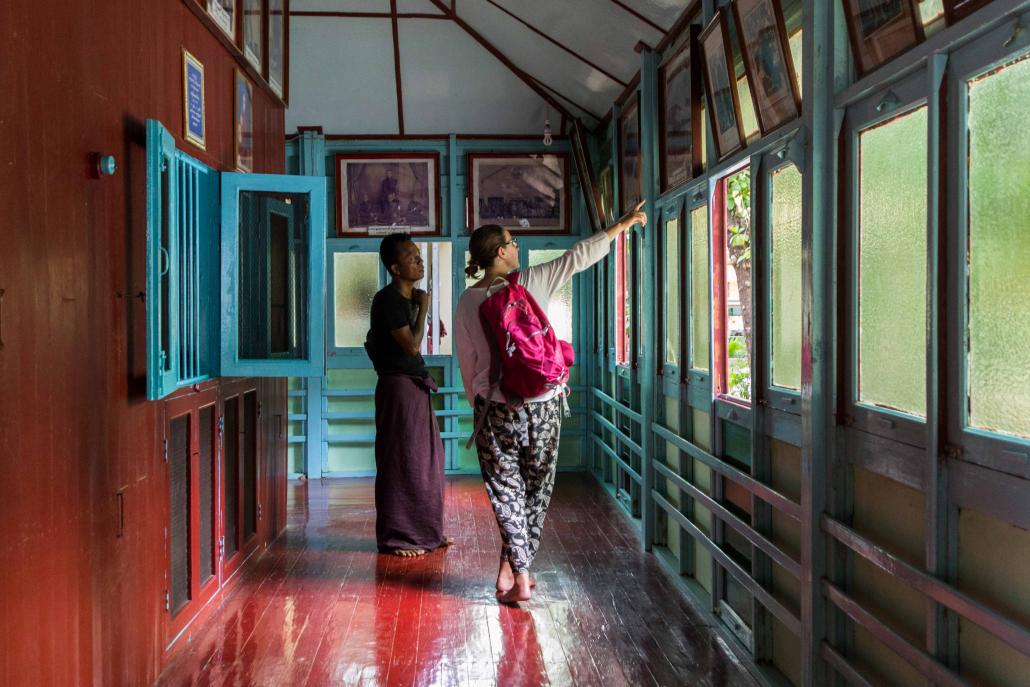 A tourist looks at historic photos in the monastery. (Teza Hlaing / Frontier)

Tampawady U Win Maung, 70, a Mandalay native and traditional Myanmar architect, who at the age of 10 had the opportunity to pay respect to Ashin Zanakabivumsa, said the monastery was deservedly famous for its emphasis on the Vinaya.

“The monastery keeps the Vinaya rules, that were laid down by the Buddha himself,” he said. “This is why the monastery is highly regarded as a symbol of Theravada Buddhism throughout the nation and beyond.”

Top photo: Monks line up to collect alms near to Mahagandayon Monastery, on the outskirts of Mandalay. (Teza Hlaing / Frontier)