A plea for Kachin unity, as dispute creates rift

A long-running dispute over ethnic identification has created a rift within the diverse Kachin community and has prompted a prominent leader to issue an appeal for unity.

The chairman of the Kachin Independence Organisation, General N’Ban La, called for unity among the Kachin people in a speech on February 5 to mark the 60th anniversary of Kachin Revolution Day at the KIO’s headquarters at Laiza, on the border with China.

Unity was essential at this important time for the Kachin revolution, N’Ban La said in the address at the event attended by Laiza residents and members of the KIO’s armed wing, the Kachin Independence Army.

“There is a dispute among our Kachin and that is why he appealed for unity,” Colonel Naw Bu, who heads the KIO’s information department, told Frontier on February 6.

The Kachin were still on the path of armed revolution because they were yet to achieve their political goals, and this was why the speech encouraged them to be united, Naw Bu said.

Unity is a delicate topic among the Kachin and it is proving difficult amid a dispute over how the community, which includes several sub-groups, should refer to itself.

Kachin is a collective name for the multi-ethnic community, which extends beyond Kachin State to neighbouring Shan State, as well areas of China and India that border Myanmar. The biggest and culturally dominant Kachin group is the Jinghpaw, whose eponymous mother tongue is spoken by most of the groups as a lingua franca.

Because “Kachin” is a Burmese-language name, the Jinghpaw prefer to use “Jinghpaw Wunpawng” to refer collectively to all Kachin groups while speaking in their own language.

However, this is opposed by some of the smaller ethnic communities, such as the Lachid and Rawang, who say the use of “Jinghpaw” privileges the dominant group. They instead advocate for the use simply of “Wunpawng”, meaning “confederation”, as a more neutral means of referring to all Kachin groups in the Jinghpaw language.

At its establishment in 1961, the KIO called itself the “Jinghpaw Shang Lawt Hpung” in Jinghpaw, meaning the “Jinghpaw Independence Organisation”. The insistence on using “Jinghpaw” in the name was among the reasons why the veteran warlord Zahkung Ting Ying, a member of the Lachid ethnic group, broke away from the KIO in 1968.

He then fought with the Communist Party of Burma before forming the New Democratic Army-Kachin in 1989, which in 2009 became a Border Guard Force under Tatmadaw command.

The disagreement also affects religious life among Kachin groups, who are largely Christian. Some non-Jinghpaw groups want to change the Jinghpaw language name of the Kachin Baptist Convention, “Jinghpaw Wunpawng Hka Lup Hpung”. This name implies that the Jinghpaw are above all others, a Lachid who asked not to be named told Frontier. 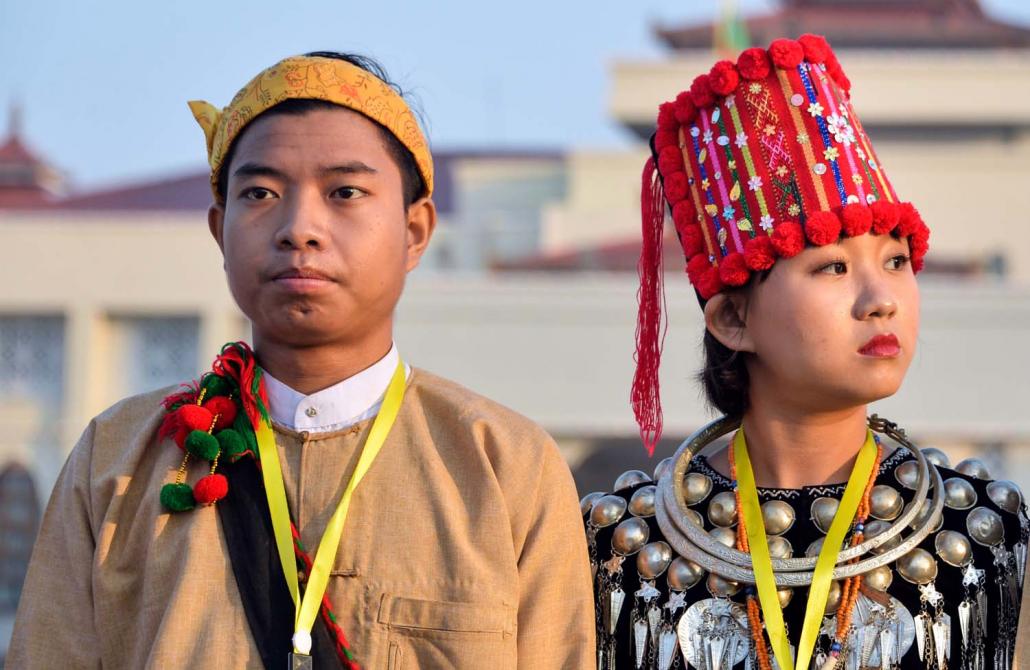 A man and woman in Jinghpaw dress attend a Union Day event in Nay Pyi Taw on February 12, 2019. (AFP)

However, beyond the problem of how to name the community, there are contrasting accounts of exactly which groups are included within the Kachin community to begin with.

However, for the 2014 census, the government ignored the objections of many Kachin community leaders and classified Kachin respondents as belonging to 12 Kachin sub-groups.

These are the Jinghpaw, Tarone, Duleng, Hkahku, Guari, Dalawng, Lashi, Lhavo, Zaiwa, Rawang, Lisu, and Kachin. The KIO says this classification, which was drawn from the government’s official taxonomy of 135 ethnic groups, was a deliberate attempt to sow disunity among Kachin people and divide them into smaller, less empowered groups.

The KIO and Kachin community leaders want the National League for Democracy government to correct the list, but first they wish to convene a public meeting in the Kachin State capital Myitkyina with representatives from all Kachin groups and the KIO to reach consensus on classification.

For the moment, the Kachin National Association of Tradition or Culture, or Wunpawng Myusha Htunghking Hpung Ginjaw (known by the acronym WHG), differs slightly from the KIO in recognising six, rather than seven, linguistically distinct groups – Jinghpaw, Lachid (Lashi), Lhaovo (Maru), Lisu, Rawang and Zaiwa (Azi).

Naw Bu explained that the KIO recognised the Rawang and the Nung as separate groups, who speak a shared mother tongue but have cultural differences, while the WHG considers them both Rawang.

However, Doi Bu, a Kachin activist and former Union Solidarity and Development party lawmaker in the Pyithu Hluttaw, said the government would not allow the public meeting required to reach consensus because the KIO is yet to sign the Nationwide Ceasefire Agreement, making it an “unlawful” organisation.

“Our Kachin people will have unity when the government corrects its mistake,” Doi Bu told Frontier. “The government was wrong to recognise 12 Kachin tribes; this is contrary to history.”

“The unity among our Kachin tribes was destroyed because [the government] acted wrongly,” she said. “We are trying to rebuild our unity.”

Meanwhile, regardless of the government’s attempts to restrict the armed organisation’s contact with the wider Kachin community, Naw Bu told Frontier that the KIO planned to hold a conference this year in an area under its control, inviting representatives from all Kachin ethnic groups, in order to reconcile differences over ethnic classification. However, he said a date and exact location had not been set. 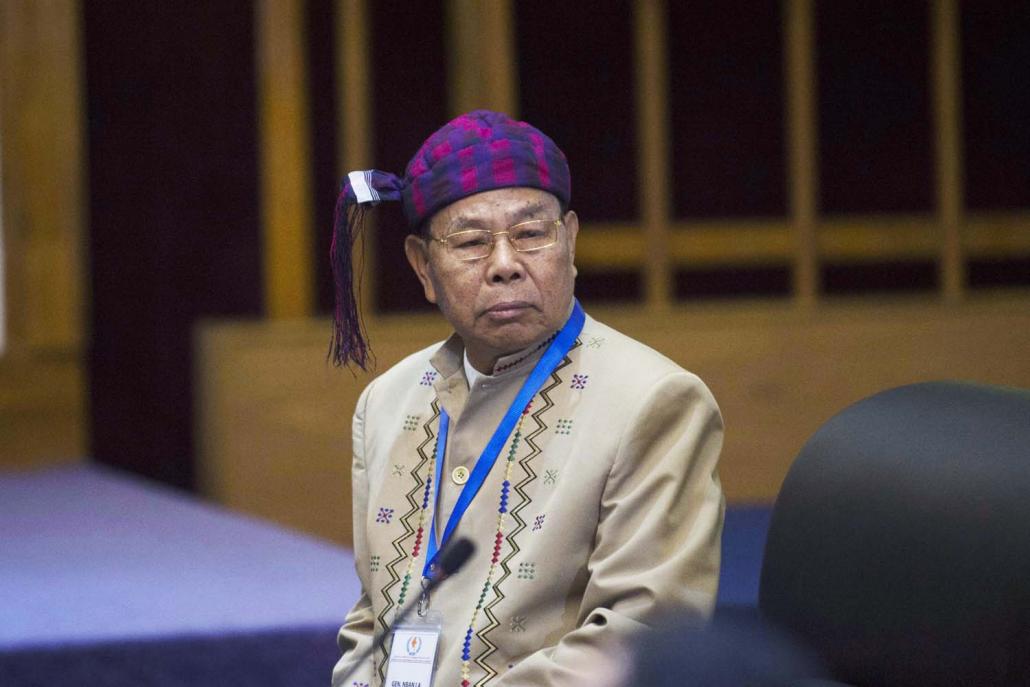 The Kachin Independence Organisation’s General N’Ban La seen at peace talks at the National Reconciliation and Peace Centre in Yangon on July 17, 2016. (AFP)

While disagreement continues over sub-groups, the dispute over how to name the broader community this year tarnished one of the most important cultural events on the Kachin calendar, the Kachin State Day (or “Manau”) festival held in Myitkyina in January.

The culture and literature associations of the Lachid, Lhaovo, Lisu, Rawang and Zaiwa ethnic groups objected to “Jinghpaw” being used in the title of the festival, at which troupes from different Kachin groups wear traditional clothing and perform a form of ceremonial dancing called manau.

The associations asked that the Jinghpaw language name of the event be changed from Jinghpaw Mungdaw Nhtoi, which it had always previously been called, to Kachin Mungdaw Nhtoi, to be more neutral and inclusive of all Kachin.

The festival was due to be held this year from January 5 to 12 but the dispute led initially to its cancellation. Amid acrimony and disarray, the state government announced on January 6 that the festival for Kachin State Day would proceed.

The controversy remains unresolved, and tensions continue to flare among some groups – particularly those that find themselves on opposing sides of the conflict between the Tatmadaw and the KIO. Leaders among the Lisu community, for instance, who have long complained of being oppressed and abused by the KIO, have increasingly tried to assert a more independent identity for themselves, separate from the wider Kachin community.

The Lisu National Development Party, the most prominent Lisu political force, has released statements denouncing the KIO and in June last year led an anti-KIO march through the streets of Myitkyina.

LNDP general-secretary Lay May Thar confirmed to Frontier in an article in July last year (“‘The blood spoke’: Lisu deaths stir unrest in Kachin”) that the party had friendly relations with the Union Solidarity and Development Party, a pro-Tatmadaw party.

Disagreements and tensions between ethnic groups in Kachin represent a fundamental challenge for the Kachin revolution, as led by the KIO. Current divisions can easily be exploited by those in the government and military who wish to undermine the Kachin cause.

However, members of some of the smaller ethnic groups feel that their long-standing grievances and continued fears of marginalisation are being ignored.