A ‘peace house’ in no man’s land

In a simple shack on the frontline in Kachin State, troops from the Kachin Independence Army and the Tatmadaw defy decades of enmity – and the orders of their superiors – to share food, drinks and friendship.

HIGH ON a mountain in Kachin State, where frontline outposts of the Kachin Independence Army and the Tatmadaw are only about 20 metres apart, there is a simple shack.

It is a place where soldiers from these warring armies come together as friends.

The shack, on a ridge about halfway between the two outposts, has helped to foster warm relations between soldiers from opposing sides in a long-running civil war. The men on the mountain call it the “Peace House”.

“If we shoot our guns, we don’t want to see bullets come from their barrels. We want to see white roses instead,” said KIA Captain La Hkam cryptically, as he monitored the Tatmadaw post on the other side of the shack.

“They [the Tatmadaw soldiers] told me that a white rose is a symbol of peace,” La Hkam said at the remote site in Chipwi Township, about 100 kilometres northeast of the state capital, Myitkyina, and close to the border with China. The mostly Bamar Tatmadaw soldiers at the outpost are far from home.

“Sometimes they tell us about their families and how they miss them, and we feel sorry for them,” La Hkam told Frontier on June 13. 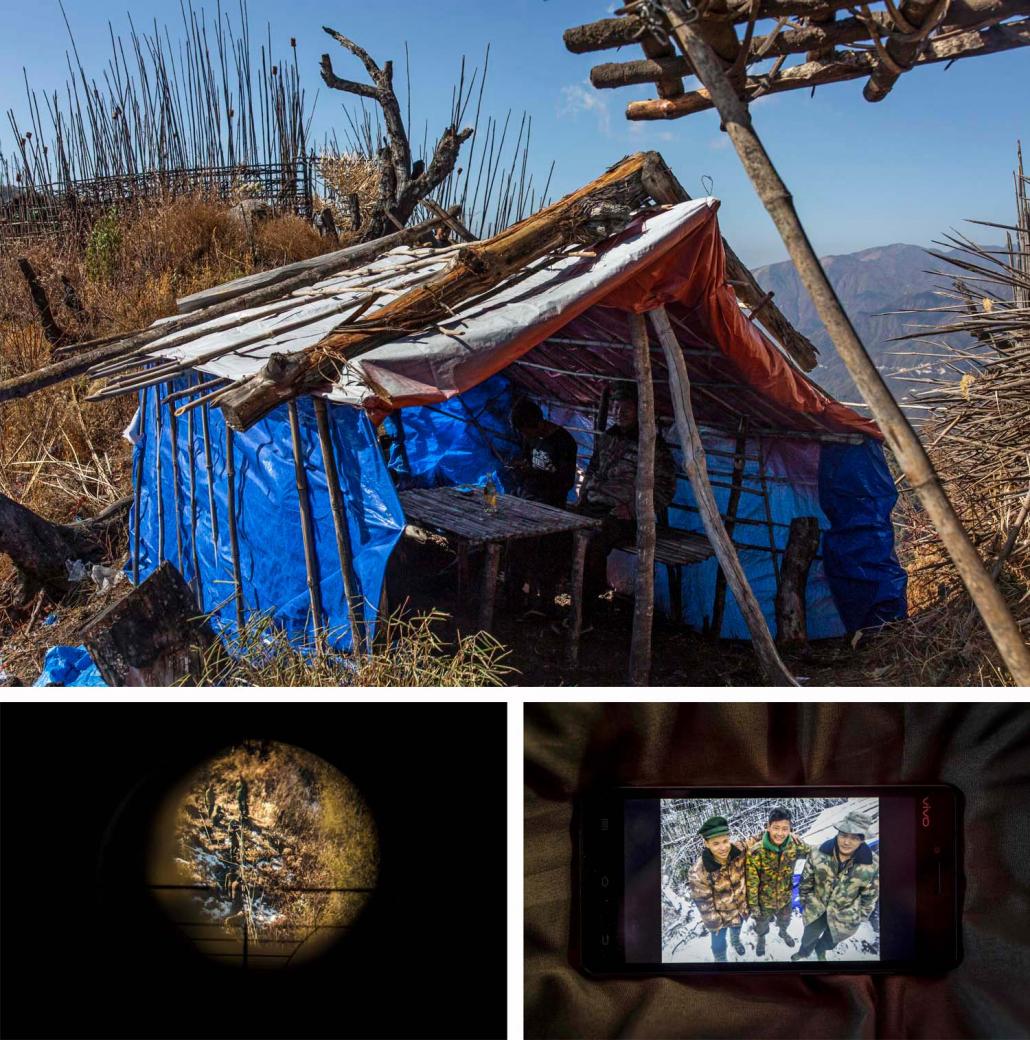 The fraternisation between the two sides on the hilltop – named by the Kachin Baptist Convention in 2012 after the Biblical Mount Zion – is miraculous to witness. The soldiers gather at the Peace House to share food and drink, and sometimes watch pornographic movies together.

The Mt Zion outpost is in an area under the control of the KIA’s Brigade 7, whose headquarters is less than a two-hour walk downhill from the outpost. About half an hour’s drive from the headquarters is a camp of blue-roofed huts that houses about 900 civilians who were displaced by the conflict in 2012, a year after fighting resumed between the KIA and the Tatmadaw with the collapse of a 1994 ceasefire agreement.

When the ceasefire broke down in 2011, the area was under the control of a Border Guard Force allied to the Tatmadaw that was previously called the New Democratic Army-Kachin. The KIA seized control of the area in 2013, forcing the NDA-K to retreat to Panwar sub-township within Chipwi.

After the KIA captured Mt Zion, KBC president Reverend Hkalam Samson travelled there to lead prayers with the troops. The area has seen no fighting since.

Though KIA officers would not reveal its exact size to Frontier, Brigade 7 is one of the smallest in the KIA and is reinforced on a rotating basis by about 100 troops each from brigades 1 and 2. When Frontier visited the Mt Zion outpost it was manned by 50 troops from Brigade 1 who are normally stationed in Putao in far-northern Kachin. 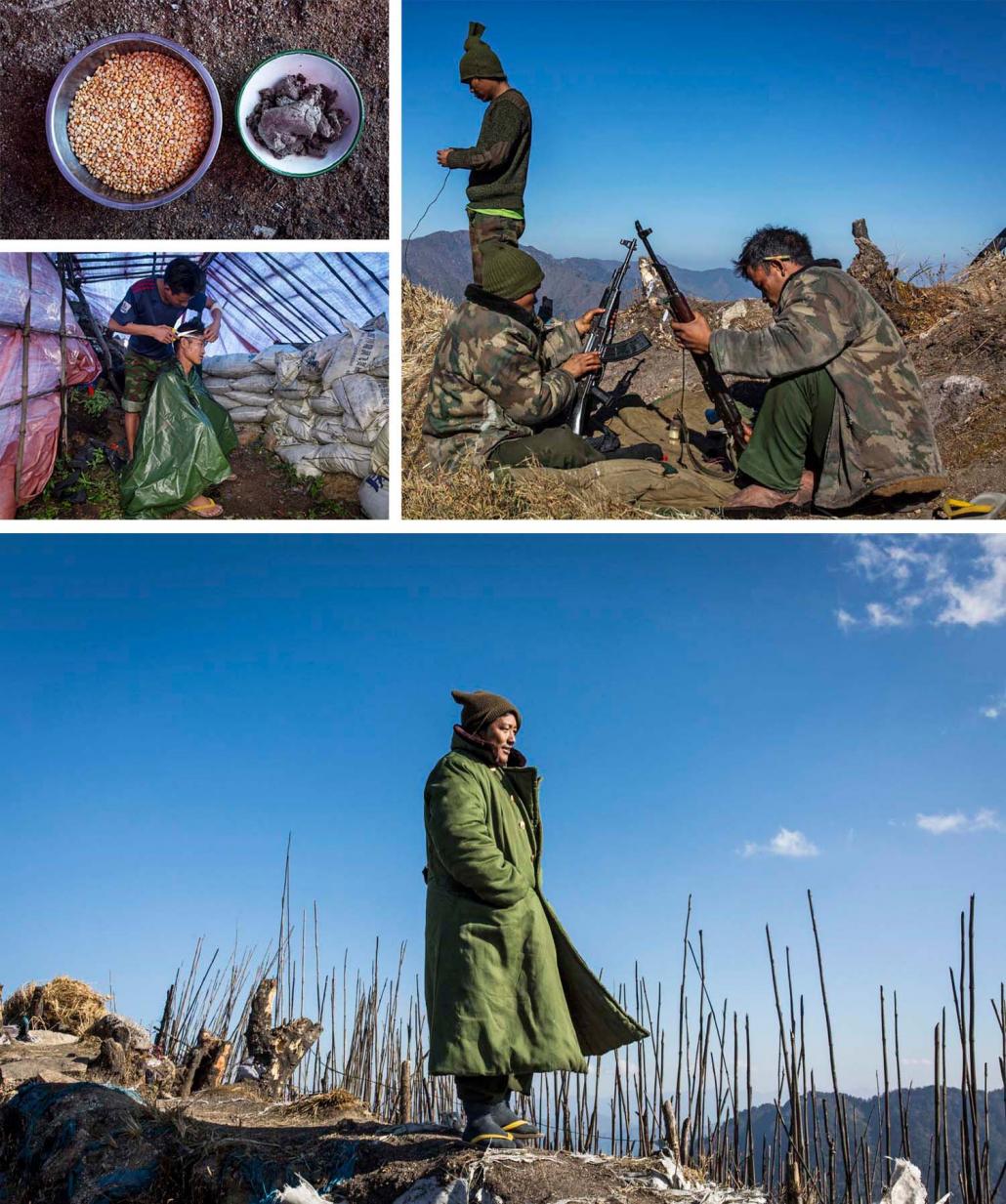 During the visit, Frontier saw Tatmadaw troops handing over notes in Chinese currency to KIA soldiers in exchange for liquor. Brigade 7 secretary Major Minzai Ze Hkawng told Frontier that the liquor and food sold to the Tatmadaw is sourced from a shop down the mountain. Despite what Frontier observed, he insisted that more was shared rather than sold.

“Our troops share food and liquor with the Burmese military because their supplies are always delivered late,” he said.

Minzai Ze Hkawng said his superiors were aware of these exchanges but had never ordered the KIA troops at Mt Zion not to share food or fraternise with the Tatmadaw.

The sharing of food is mutual. Frontier’s visit coincided with the delivery of supplies to the Tatmadaw, who then shared some of the food they received with the KIA as well as an instant tea product that is produced by Tatmadaw-owned factories.

Frontier also saw Tatmadaw soldiers hand 10 bullets to KIA troops to hunt for game on the understanding that any animals they caught would be shared.

Brigadier-General Zaw Min Tun from the Tatmadaw’s True News Information Team told Frontier by phone on June 24 that the Tatmadaw does not allow its troops to fraternise with members of ethnic armed groups that have not signed the Nationwide Ceasefire Agreement. He added that the sharing of bullets was prohibited. 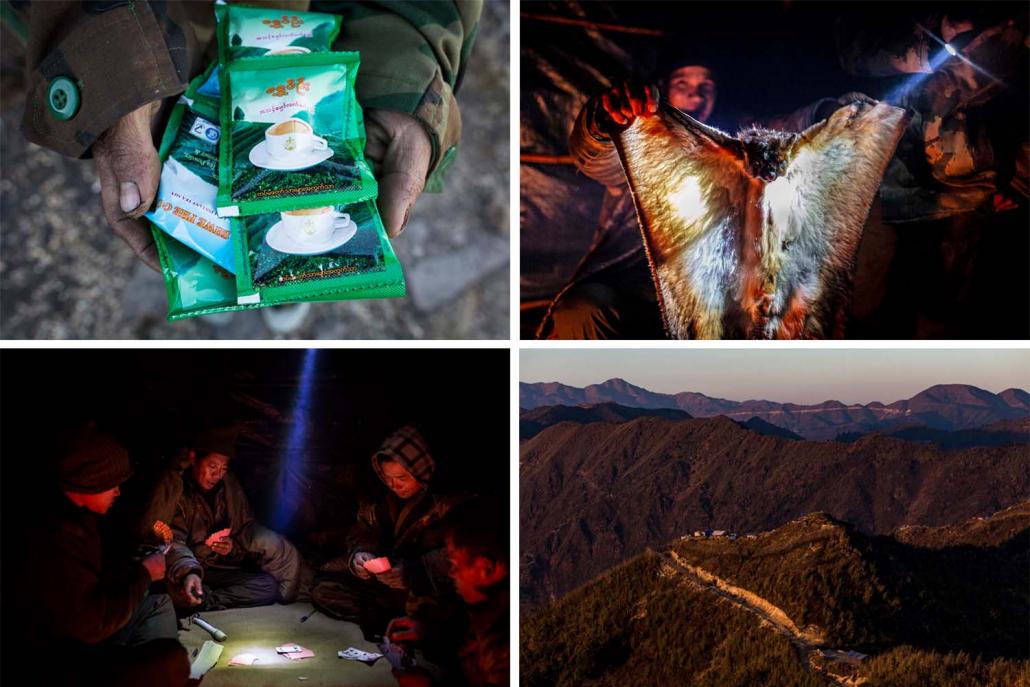 The KIA, whose political wing is the Kachin Independence Organisation, has not signed the NCA. The group suffered heavy losses in Tatmadaw offences early last year, but fighting has quietened since the Tatmadaw announced a unilateral ceasefire that covered military commands in Kachin and Shan states in December 2018. The ceasefire has since been extended until August 31, ostensibly to aid negotiations that would result in the KIO signing a bilateral ceasefire and then, later, the NCA.

“We know that some of our troops are together with the ethnic armed groups; it is not in line with discipline,” said Zaw Min Tun. But he added, “We do not tell them not to do that.”

La Hkam said the KIA on Mt Zion helped the Tatmadaw soldiers who were sent there because they did not regard these men as enemies.

He said the assistance included meeting requests from the Tatmadaw for KIA uniforms that were better suited to the weather on Mt Zion, which is freezing during the winter months.

However, KIA spokesperson Colonel Naw Bu told Frontier by phone on June 24 that its troops were banned from providing uniforms to “the enemy” and the case would be investigated.

“We have no exact rules for our troops, but we don’t allow that kind of thing,” he said.

KIA troops at the Mt Zion outpost fear they may one day receive an order from headquarters to resume fighting. If that happened, La Hkam said the troops would fire into the air because they do not want more conflict. But he stressed that the KIA would fight back if the Tatmadaw launched an attack.

“We will protect our post if the Myanmar military fires first,” he said. “[KIA] headquarters has issued orders that we can return fire without waiting for commands [from above], because many of our KIA troops gave their lives for this post.” 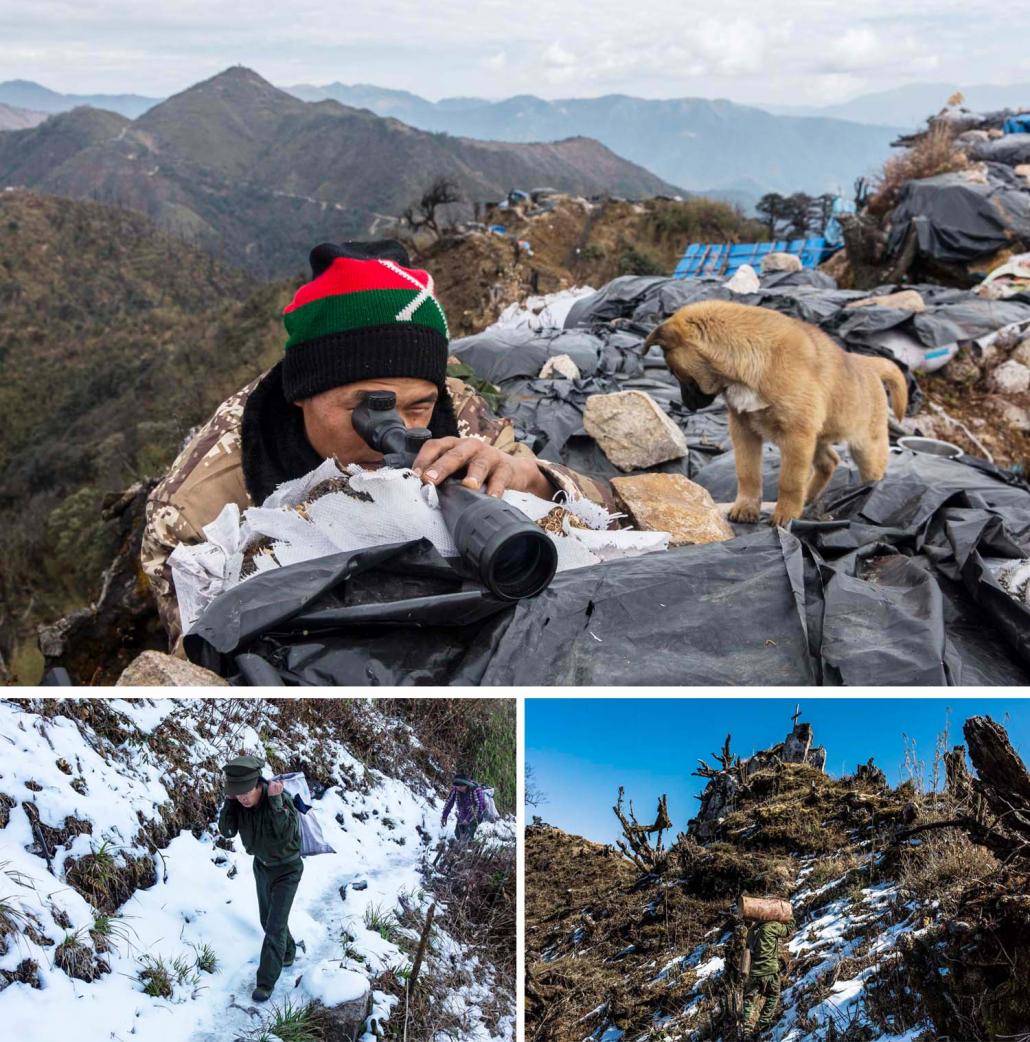 A KIA soldier watches the Tatmadaw post less than 20 metres from his own post on Mt Zion (top), KIA soldiers return to Mt Zion with water from an icy stream (bottom left) and carry wood to the Mt Zion post (bottom right). (Hkun Lat | Frontier)

Living conditions are tough for the soldiers on Mt Zion. There is no electricity or mobile phone network coverage and the soldiers have to withstand constant downpours in the rainy season and heavy snow during the winter.

The KIA troops deployed to Mt Zion from Brigade 1 told Frontier that they miss Putao, where the weather is less harsh and there is mobile network coverage.

“I want to go back to our brigade’s base. I can’t contact my family here and it makes me feel lonely,” said a soldier from Brigade 1 who declined to give his name.

KIA Private Mai Mai, 23, who had just begun his six-month deployment to Mt Zion, said he was already looking forward to his return to Putao in December because he would be reunited with his girlfriend.

“I miss her very much,” he said. “At the moment she is studying for her matriculation exam.”

Minzai Ze Hkawng said Brigade 7 needed bolstering with reinforcements from other brigades because there was only one village, Hpare, in the area under its control and recruiting enough troops was difficult.

All residents of Hpare had fled their homes in 2012 because of the conflict and were living in the internally displaced persons’ camp close the brigade headquarters. But Brigade 7 had no intention of finding recruits among the IDPs because “it is not fair to them”, he said. 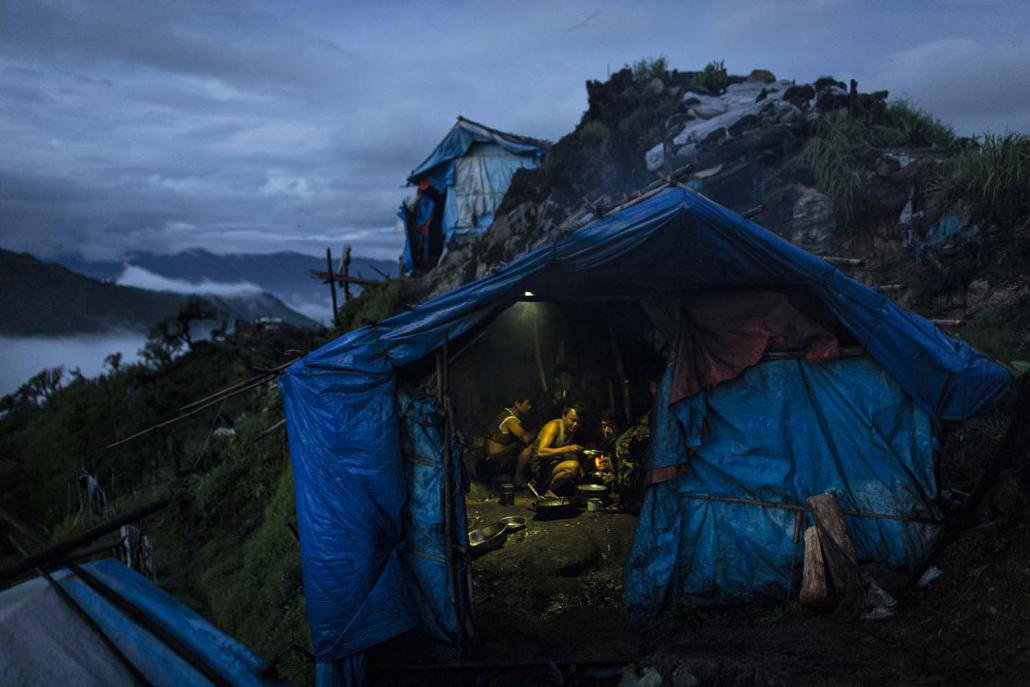 Lum Zawng, a Kachin youth activist, said he hoped the KIA and the Tatmadaw would not take any action against their men on Mt Zion for maintaining friendly relations.

“The troops on the frontline do not want to be fighting,” he said. “It would help the peace process if there were more peace houses in other locations.”

Despite the Tatmadaw’s unilateral ceasefire, which has held long into 2019, few place much hope in the peace process, which has stagnated under the National League for Democracy government that took over in 2016. But high up on Mt Zion, fighters from either side of a decades-long war have enjoyed a kind of peace since 2013.

TOP PHOTO: Soldiers from the Tatmadaw (right) and Kachin Independence Army watch a music video on January 24 at the “peace house” they built together in the no man’s land between their frontline positions on Mt Zion. (Hkun Lat | Frontier)