The rich diversity of Myanmar’s ethnic communities is manifested in distinctive traditions, many of which are centred on major life events.

IT SHOULD not be surprising that there are vast differences in customs and traditions among Myanmar’s 135 official ethnic nationalities and the significant minority of residents with ancestors from China and the Subcontinent.

Some of the most noticeable differences are evident in the rites of passage that mark transitions from one stage of life to another, and one of the most important of these rituals involves marriage.

For various reasons, including a proud desire to maintain cultural traditions, as well as social and family pressure, most couples marry within their ethnic group, as my Mon friend did in April.

The happy event marking the start of their lives together was a celebration of Mon tradition and culture.

Zuzin Ei San said preparing for the wedding was a rich learning experience that deepened her appreciation of Mon traditions and the importance of cultural maintenance.

“I want the younger generation to learn all they can about Mon wedding traditions before they marry, too,” she told Frontier after the ceremony took place.

“Once you are engaged you don’t have much time to wait for the wedding; the day after the engagement you have to be ready for your wedding day,” she said, adding that the short timeframe was normally due to pressure from family members. 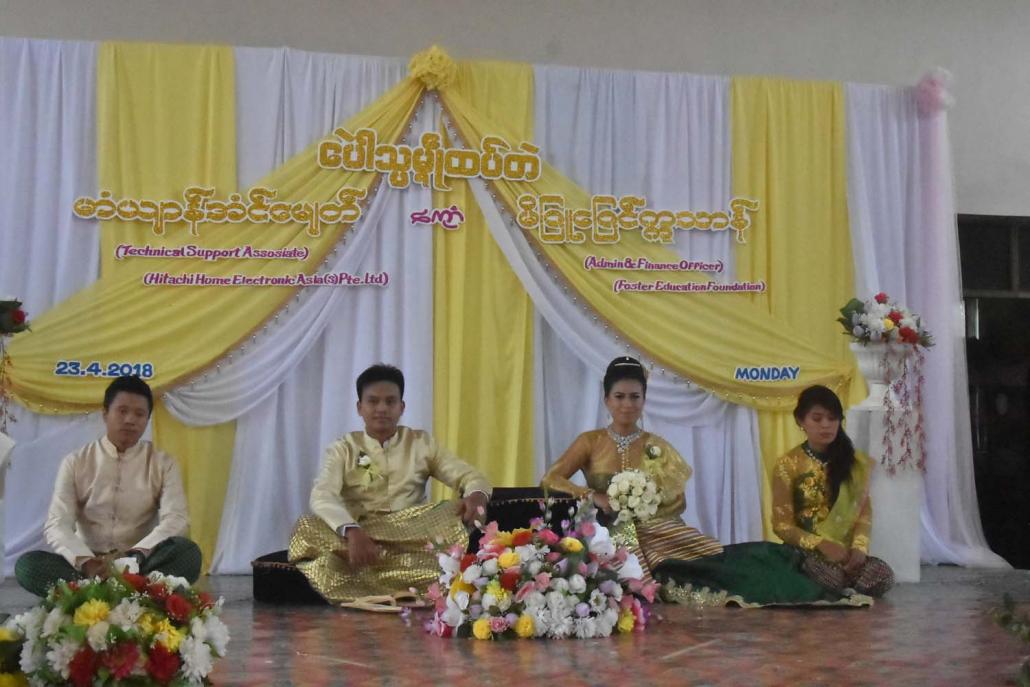 Zuzin Ei San said she was criticised for not marrying almost immediately after she became engaged, but explained that was not possible because her boyfriend was working in Singapore. They had to wait three months before he could return to Myanmar for the wedding.

Another Mon tradition requires the groom to spend the first seven days of his married life in the home of the bride’s parents. The bride “accepts” the groom into the home and only after a week has passed is it acceptable for the couple to go on a honeymoon or sleep elsewhere.

Staying at the bride’s parent’s home is an important part of the Mon wedding ceremony, but families can choose not to host the married couple.

Another tradition that is strictly followed at Mon weddings are the rituals of paying homage, in an early morning ceremony on the day of the wedding to the parents of the bride and groom, and later to monks at a blessing ceremony for the newly-married couple.

In the first ceremony, the bride is walked in a circle in front of the guests, although this doesn’t happen if a woman is remarrying. The guests then offer gifts of money or gold, as a woman with a flower bowl walks around those who are present.

At the conclusion of the second ceremony, during which Buddhist blessings are chanted, the couple offer robes to monks. The day’s festivities are over when the newlyweds retire to bed, which has been prepared for them by a female companion.

After the ceremony, Zuzin Eu San’s father, Nai Thaung Zan, praised the couple for maintaining the Mon tradition, highlighting the importance of their writings in particular.

“It will help to keep the strong Mon literature alive,” he said.