A new plan developed by the Ministry of Natural Resources and Environmental Conservation with input from international conservation groups aims to ensure that Myanmar’s wild elephants are not lost to history.

MO MO the elephant was born somewhere in rural Kayah State in the 1950s. She couldn’t tell you – for obvious reasons – but one imagines life was pretty good for her back then, traipsing through the dense jungles of eastern Myanmar.

But in 1961, when she was just a few years old, Mo Mo was captured and transferred to the then-capital. She’s lived at Yangon Zoological Gardens ever since. For years, her weekend performance – which saw Mo Mo dancing and performing other circus-like acts – captivated visitors to the zoo.

In May 2016, the Myanmar Times criticised the zoo for its small enclosures and described a “grotesque” animal show in which the zoo “is forcing its elephants to perform strenuous tricks in temperatures upwards of 40 degrees Celsius”.

A few months later, the show was cancelled and Mo Mo entered a well-deserved retirement.

Her show may have been a highlight for visitors, but it is reasonable to suggest that, as a wild elephant, Mo Mo would have been happier in her natural environment.

Like Mo Mo, the majority of elephants in Myanmar are captive. Of the estimated 7,000 animals, just 2,000 are wild and conservation groups are warning that the species could soon disappear outside of zoos, sanctuaries and logging camps. Poaching is one of the biggest threats to the survival of wild elephants; they are killed not only for their ivory but also body parts, which are used in traditional medicine. Elephants are also caught illegally and traded live to neighbouring countries, while loss of habitat is another major challenge to their survival.

Elephants have a long and proud history in Myanmar. For thousands of years they have been used for transportation, construction, agriculture and war. The white elephant in particular has long been regarded as a symbol of power and royal status.

In October 2017, a coalition of conservation groups in Myanmar established “Voices for Momos”, which aims to contribute to the protection of the country’s Asian elephants. The campaign, which is supported by groups including WWF, the Wildlife Conservation Society and Fauna & Flora International, estimates that Myanmar is losing one wild elephant every week.

“We aim to do our part and help raises awareness of the wild elephant crisis for future generations,” said Daw Sandar Htun, chief executive officer of Shwe Taung, a company that has thrown its support behind the campaign.

Last week, the Forest Department, under the Ministry of Environmental Conservation and Forestry, released the Myanmar Elephant Conservation Action Plan, which aims to guide policymaking so that wild elephants are able to co-exist with humans.

“The elephant has been a revered animal and national treasure for Myanmar for centuries,” said Mr Antony Lynam, senior regional advisor, Asia Programs, Centre for Global Conservation. “Myanmar can learn now not to manage its captive elephants by looking across its border to Thailand where out of work elephants have been mistreated for decades, and wild elephants from Myanmar continue to be laundered into the domestic market, even re-exported to Lao and China.”

Lynam said that as the timber industry winds down in Myanmar, increased efforts need to be made to ensure elephants in captivity are treated humanely, and that the wild elephant population is stabilised.

“The MECAP and its associated implementation plan provides the guidance needed to ensure the survival of the elephant in a rapidly changing Myanmar.”

Asian elephants live in the part of the world with the densest human population, the report said. Because elephants require much larger areas of natural habitat than many other mammals in Asia, they are one of the first species to suffer the consequences of habitat loss.

“This loss of habitat leads in turn to increasing conflicts between humans and elephants when elephants eat or trample crops, and injure or kill people,” said the report. “Hundreds of people and elephants are killed annually as a result of such conflicts.” 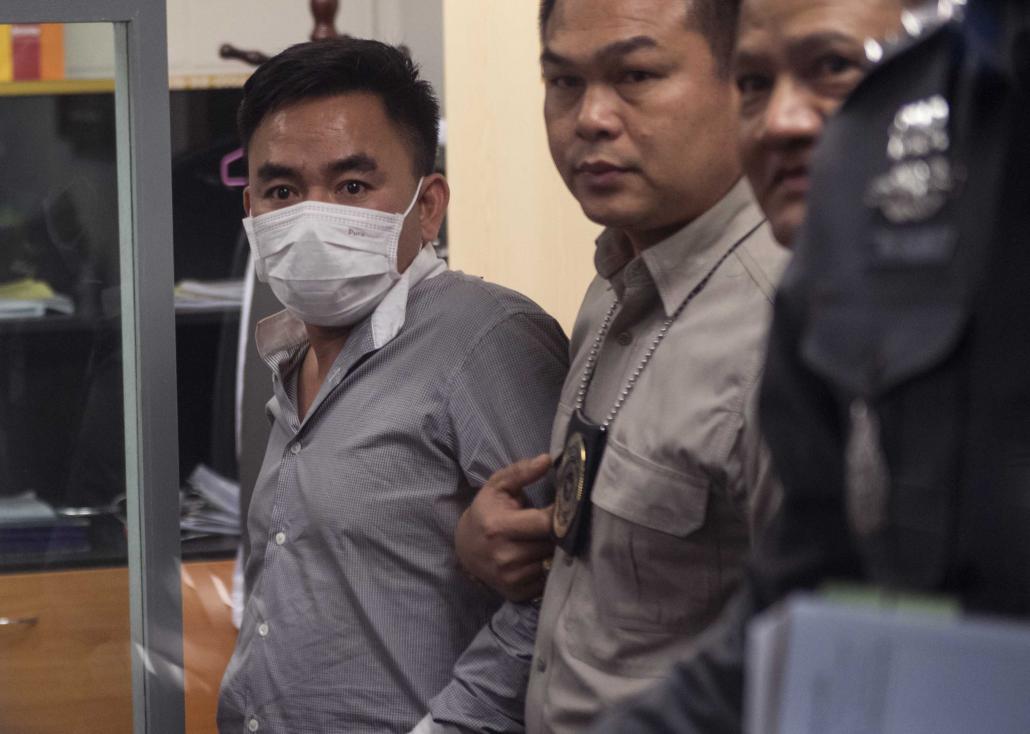 Boonchai Bach, 40, a Vietnamese national with Thai citizenship and alleged kingpin in Asia’s illegal trade in endangered species, is handled by Thai police in Bangkok after his arrest on January 20, 2018. (AFP)

Poaching is another grave threat to the survival of wild elephants. The report noted that the issue is sometimes seen as a minor threat to Asian elephants because only few males have tusks.

“However, the reality is that elephants are poached for a variety of other products (including meat and leather) in addition to ivory, and poaching is now acknowledged as a threat to the long-term survival of some Asian elephants, especially those in Myanmar,” the report said.

Myanmar has been a party to the Convention on International Trade in Endangered Species of Wild Fauna and Flora (CITES) since 1997, but ivory and other elephant parts are still regularly smuggled out of the country, contravening the 1994 Protection of Wildlife and Wild Plants and Conservation of Natural Areas Law.

This “suggests a serious lack of law enforcement and a blatant disregard for international conventions and national laws”, the MECAP report said, adding that sellers openly display ivory and other elephant parts, and rarely hesitate in disclosing smuggling techniques.

In 2006, wildlife trade monitoring group TRAFFIC surveyed 14 markets in Myanmar and three border markets in Thailand and China. The survey found that 9,000 pieces of ivory and 16 whole tusks were being sold, and according to the dealers, the ivory was generally being sold to people from China, Thailand and Japan, and some from the United States, Italy and France.

The illegal ivory trade appears to have increased in Myanmar in the last decade, the MECAP report said. A study at the border town of Mong La found 3,494 pieces of carved ivory between 2006 and 2014, and 49 whole tusks in 2013 and 2014. Mong La, which is infamous for the selling of wildlife products to China, is the capital of Special Region 4 in eastern Shan State, and is controlled by the National Democratic Alliance Army – Eastern Shan State.

“The origin of the ivory for sale in Mong La seemed to constitute a combination of Asian elephant ivory from Myanmar (and possibly other parts of Asia) and African ivory imported via China (then re-exported to China once carved),” the report said.

Other elephant parts found in Myanmar markets include skin, teeth, bones and hair, as well as meat and genitalia.

The main source of elephants from Myanmar is Kachin and Rakhine states, Sagaing Region and the Dawna area in eastern Myanmar, while Chiang Mai Province, Phuket and Surin were the main destinations for live elephants smuggled from Myanmar into Thailand, the report said.

Struggles on the ground

Government-enforced restrictions and the fact that many elephants live in areas affected by conflict make it difficult for local organisations to tackle the threats to wild elephant, said U Phone Win, founder of environmental NGO Mingalar Myanmar.

“They often struggle to get permission and have to worry about their security because some areas where elephants live are in conflict areas,” said Phone Win, who is planning to establish an elephant sanctuary in the Bago Yoma mountain range.

Phone Win said that in 2007 local organisations involved in wildlife conservation held a forum aimed at discussing the wildlife issues in the country. The attendees submitted to the government a list of animals that needed protecting, including wild elephants, but never received a response, he said.

“It’s like a black hole,” he said. “The government does what they want. They don’t give NGOs permits to go to areas where elephants live.”

For many rural communities, an increasing issue is human-elephant conflict. As elephants’ natural habitats disappear, the risk of them moving into areas inhabited by people increases. 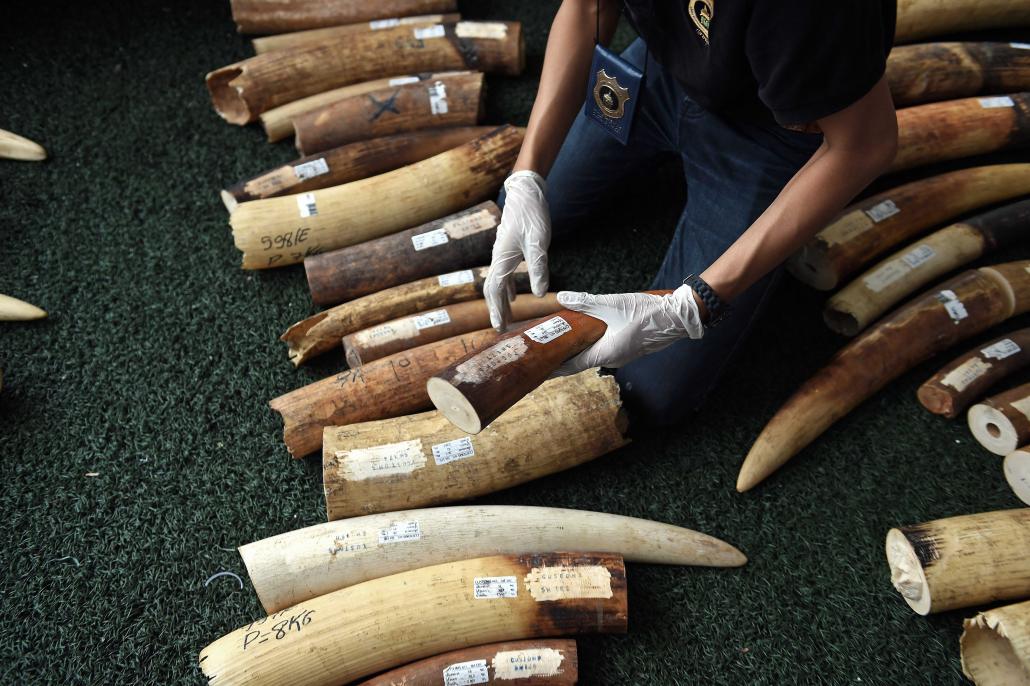 Elephant tusks are displayed by wildlife officials at the Customs Department after more than 700 kilograms of ivory items – 113 tusks and 168 pieces – were seized on the Thai island of Ko Samui. (AFP)

“Elephants came and they destroyed our paddies and other plantations when they were looking for water,” said U Aung Ko Lwin, the administrator of the village tract.

Aung Ko Lwin said such incidents happen frequently. When the elephants arrive the villagers try to scare them off, and if that doesn’t work they call the Forest Department.

Aung Ko Lwin said his community has been given some guidance in how to deal with the elephant problem, but the help has been limited and no training has been given for more than a year.

“We need help from government and non-government organisations,” he said. “We don’t want to fight with elephants.”