'Playing for beauty and playing to fight': Myanmar's martial arts

MYANMAR traditional martial arts, or thaing, which feature graceful movements that can be executed with deadly intent, is rooted in the traditional culture of the Bamar and some other ethnic groups.

Researchers have traced the earliest form of thaing to the 12th century during the Bagan (or “Pagan”) dynasty, when it was one of the most powerful kingdoms in mainland Southeast Asia. Historical records compiled by the Myanmar Thaing Federation show that masters of Buddhist ascetic discipline, known as ayee gyi, established training schools called pwe kyaung to teach thaing. There were restrictions on who could be trained because it involved secret practices.

After the Bagan dynasty fell to an invading Mongol army in 1287, the tradition of teaching thaing to princes and soldiers was continued by the succeeding Myinsaing kingdom.

Although varieties of thaing are practised by at least four ethnic groups, the type developed during the Bamar Konbaung dynasty (1752-1885) and Kanbawza, or Shan, thaing, are regarded by connoisseurs as the most superior forms. Other variants known as Yamanya and Danyawaddy were developed by the Mon and Rakhine respectively, and a simple but rough form of thaing evolved from the Shan style and is known as thaing byaung-byan, or reverse thaing.

The main overarching categories of thaing are bando, involving the use of the fists and other parts of the body, and banshe, in which weapons such as sticks or swords are used. Traditional boxing, lethwei, and wrestling, lethpan, fall within the bando category. However, most thaing practitioners do not consider lethwei in its increasingly popular (and brutal) competitive form, where it resembles Muay Thai from Thailand, to be true thaing.

MTF secretary U Aung Naing Oo described lethwei as “a simple form of boxing”. He said, “Anyone can understand lethwei, but traditional thaing is more complex.”

Thaing fighters can use their head, fists, arms, hands, elbows, knees, shins, thighs and feet, which is why it is also known as the “martial art of the nine limbs”. Though this implies a brutal spectacle, dance and theatre techniques were adapted for use in thaing movements during the Kongbaung era, which enhanced the graceful quality of the fighting.

“There are two ways of doing traditional thaing; playing for beauty and playing to fight,” said U Win Myint, 52, a seasoned thaing byaung-byan master who runs a class in Yangon’s South Okkalapa Township.

“The first way is graceful and the second is really violent combat,” he told Frontier.

“Thaing movements can change within seconds from delicate dancing to fierce fighting,” Win Myint added. “Concentrating on vulnerable parts of the body is the essence of Myanmar thaing.”

Thaing fighters are graded and at the top of the hierarchy are the pin ma gang choke, the Great Masters, who often lead their own group of followers referred to as sects. One step lower are the sayas, the Masters, such as Win Myint, who recruit and train new fighters. It was once common for thaing masters to wear a tattoo that signified their rank, though today they are mainly seen on thaing-byaung-byan fighters. 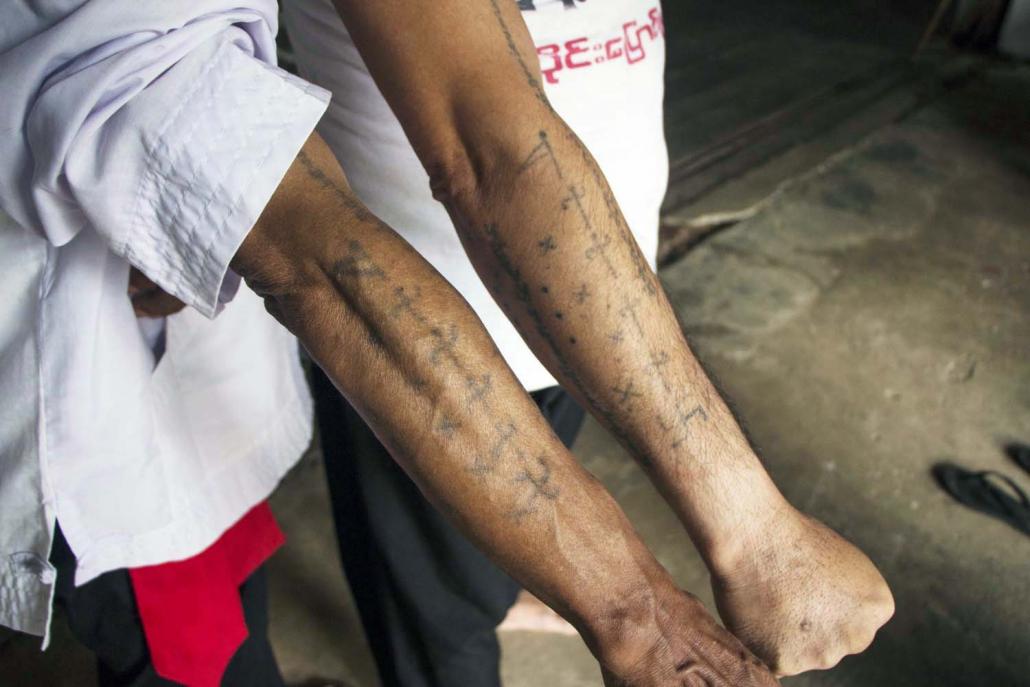 Thaing masters show tattoos on their arms that indicate the level they have attained in the sport. (Thuya Zaw | Frontier)

‘In danger of extinction’

Thaing fighters participated in the anti-colonial movement, though the different groups did not organise into a coherent front, being more accustomed to competing with one another.

In November 1964, the leaders of the different thaing sects formed a committee in Rangoon, then the capital, which documented the techniques and attributes of the various sects and offered training to young people.

The committee’s school taught the physical techniques as well as the philosophical principles of thaing, said U Nan Win, 77, a Great Master of the Yan Taing Aung sect who formerly taught at the school.

“At that time, there were so many people who were interested in Myanmar thaing and so many masters who could train them well,” he said,

On January 1, 1966, the Myanmar Thaing Federation was formed with a motto translating as, “Every Myanmar person must know the skills of Myanmar thaing.”

The federation’s training schools produced more than 2,000 thaing coaches until 1988, when they were shut down by the military junta that took power during a national uprising against one-party rule. Since then the popularity of the sport has waned, though it began being taught as a form of combat training to members of the Tatmadaw and the Myanmar Police Force in 1990.

“What is the use of teaching thaing if you cannot make a living from it these days? “ said Nan Win, lamenting the limited demand for lessons from a largely uninterested public.

“There used to be thaing specialists whose skills were perfected by constant practice, but no one has reached that stage today and the martial art is in danger of extinction,” he said.

“Thaing is rough and demanding and requires practice over a long time, and that’s why young people are more interested in foreign [martial arts] skills such as karate and judo,” said Win Myint.

In absence of government support, the MTF has been funded since 2011 by the diversified Shwe Taung Group, one of the country’s biggest corporations. U Aung Zaw Naing, the chief executive officer of Shwe Taung and the son of company founder and chairman U Aik Htun, took over the chairmanship of the MTF in 2011. Last year, Shwe Taung board member U Ye Myint, a former thaing fighter, graduated from vice-chairman to chair the federation. Before 2011, the chairmen tended to be Tatmadaw or police officers.

Nan Win said veteran thaing practitioners want it to be taught in schools across the country, as part of the national curriculum, but acknowledged that the probability of that ever happening was “very low”. The MTF discussed it with the Ministry of Education in 2000, with no result, and lobbying efforts have been dormant since then.

The federation continues to train members of the Tatmadaw and the police, alongside a few civilians for whom thaing can offer a fast track into the security services. About 20 trainees attend daily classes, said the MTF’s chief trainer U Nyunt Lwin. “Outstanding civilian trainees are invited to join the army or the police,” he said, adding that prowess in thaing can also mean promotion for acting soldiers and police officers.

“It takes years of dedication to achieve mastery in thaing; it’s not possible with only moderate interest,” he said. 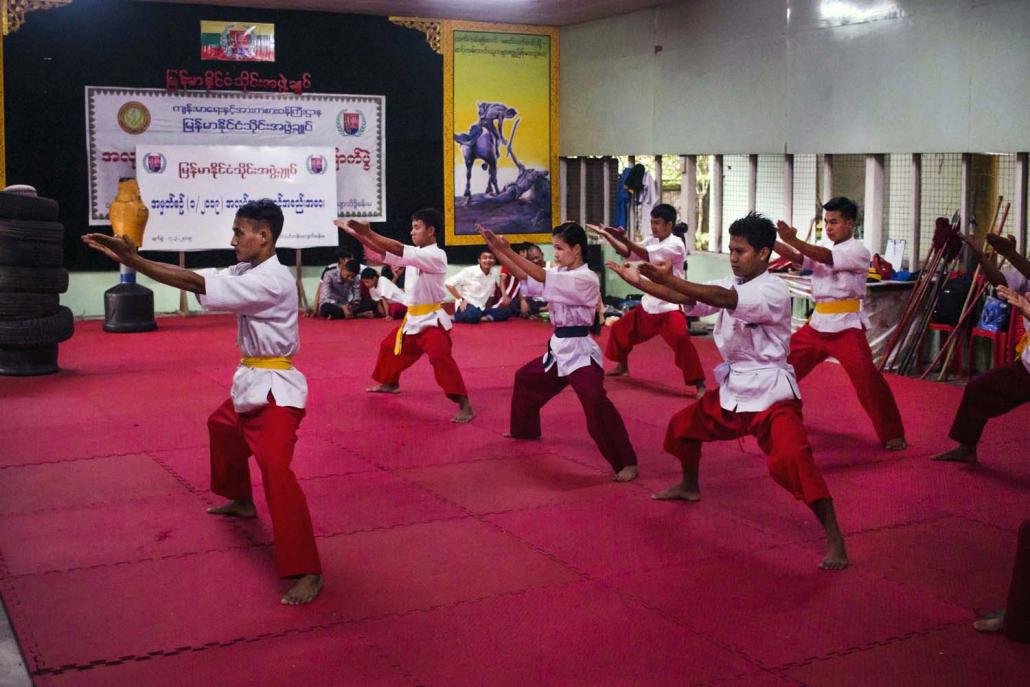 Thaing students train with a sword. Veteran thaing practitioners want it to be taught in schools across the country as part of the national curriculum. (Thuya Zaw | Frontier)

The MTF hopes to have thaing – in its bando form, without weapons – introduced as a competitive sport in the Southeast Asian (SEA) Games. The traditional martial arts of other Southeast Asian countries are already showcased at the sporting event, which takes place every two years, with the 11 countries that participate taking turns to host the games.

MTF secretary Aung Naing Oo explained that inclusion in the SEA Games would require the support of four other participating countries, whose own athletes would then be trained to compete in thaing with Myanmar fighters. “That’s what we’re trying for,” he said.

However, with the government neglecting to commit any resources to this goal, or even to support thaing’s development within Myanmar, the MTF have their work cut out.

Director general for sport and physical education at the Ministry of Health and Sports, U Myo Hlaing, admitted to Frontier that, though the ministry would be keen to see thaing at the SEA Games, there was no money to spare for its promotion. “It all depends on the budget, right? If there isn’t enough, we can’t do anything but dream,” he said.

Since 2012, the MTF has been hosting training sessions in pencak silat and vovinam –martial arts from Indonesia and Vietnam respectively – so that Myanmar fighters can compete in those forms at the SEA Games, and has also arranged for fighters to be sent to those countries for extra training. It hopes that the greater contact with fighters and associations across Southeast Asia will eventually win them the necessary support for thaing to be included in the games.

Pencak silat was introduced at the SEA Games in Indonesia in 1987 and vovinam when Indonesia again hosted the games in 2011. Some Myanmar fighters have proved themselves in these martial arts. MTF spokesperson U Ha Htang said that, since 2012, Myanmar competitors had won about 100 medals in vovinam and about 50 in pencak silat at regional events.

Ko Cho Htun, an MTF member who has competed in vovinam, said, “Indonesian martial arts and Vietnamese martial arts are not altogether foreign to Myanmar thaing practitioners; they are similar and trainees can absorb them in a short time.”

Ha Htang said the MTF hoped to have Myanmar thaing introduced at the 31st SEA Games to be hosted by Vietnam in 2021, but the chances were slim, partly because a curriculum suitable for the teaching of foreign fighters had not yet been developed.

However, thaing veterans and purists such as Nan Win object to the idea of traditional Myanmar martial arts being reduced to points-based contests, believing that they are best kept to artistic showcases. This puts the purists at odds with the MTF, whose leading members are mostly younger.

“If a thaing fighter is competing only to get marks, he cannot be called a real thaing man,” said Nan Win, pouring scorn on the sparsely attended tournaments that have been held across Myanmar since the year 2000, most commonly within the ranks of the Tatmadaw and police.

Nan Win believes that versions of thaing that preserve traditional techniques, which risk being lost or degraded in more competitive forms, are in dire need of government support.

He said traditional thaing could be compared to a bed-ridden wife afflicted with a chronic disease. “Sometimes I just want to leave her alone, but because she is the one I really love, I can’t leave her,” he said.

TOP PHOTO: U Nan Win, a Great Master of the Yan Taing Aung sect of thaing, shows some of his moves. (Thuya Zaw | Frontier)

Hein Thar is a reporter at Frontier. He become a journalist in 2014 and previously worked at 7Day as a senior reporter, where he wrote features.

As cases decline in Rakhine, residents hope for end to restrictions

Officials say the number of confirmed COVID-19 cases is decreasing in Rakhine State, but residents are struggling under stay-at-home orders and other restrictions that are pushing up commodity prices.
BY Kaung Hset Naing