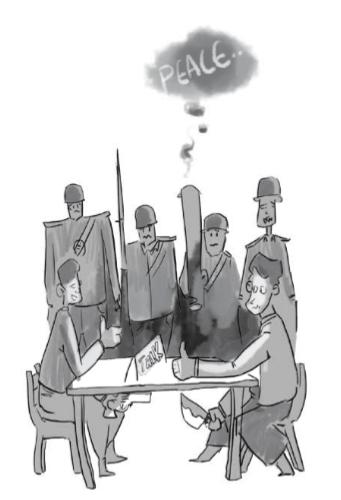 The inaugural Union Peace Conference wrapped up in Nay Pyi Taw on January 16 with all the usual fanfare. President U Thein Sein launched the peace process in August 2011 and has never resiled from making it a central plank of his administration: Even the modest achievements of the ceasefire negotiations have been feted and trumpeted with vigour by the government and the state-run media. Analyst Bertil Lintner derisively dubbed the process as the “peace-industrial complex”.

A case in point was the official revelry that accompanied the signing last March of a draft text for a national ceasefire agreement. Ethnic armed groups withheld their final assent until after convening two summits, first in the Wa stronghold of Panghsang and then at the Karen National Union headquarters at Law Khee Lar.

By the end of the second meeting, the armed groups involved in the ceasefire negotiations had split into two camps – those for and against signing, while the government remained steadfast in excluding several groups from the process. A late attempt to secure more favourable terms, led by NU vice-chair Naw Zipporah Sein, failed to shift the government’s resolve. By the time the ceasefire accord was signed on October 15, many of the country’s biggest armed groups had withheld their support. Naw Zipporah Sein’s refusal to express support for the accord was itself indicative of the deep divisions within some of the eight groups that did sign.

Last week’s conference resolved to finalise an agreement on federal reform within the next three to five years. That may be too ambitious. It took more than four years of negotiations to secure the limited ceasefire signed last October by groups that were either already parties to bilateral peace deals or of little consequence. The ceasefire agreement set the agenda for what would be discussed after it was signed; now that these issues will need to be discussed at length, the thorny questions of resource sharing, devolution of political power from Nay Pyi Taw and a federal army are no longer matters of idle abstraction.

Many ethnic leaders have suggested that the coming installation of an NLD-led government would expedite negotiations because they believe that Daw Aung San Suu Kyi would be more conciliatory toward ethnic aspirations. Her recent actions suggest an equivocal attitude, first declining an invitation to last week’s conference before arriving to address the opening of the event. Questions also remain over whether an NLD government will retain bodies established by the outgoing administration to support the peace process, such as the Myanmar Peace Center.

However, ethnic leaders will be encouraged by Daw Aung San Suu Kyi’s statement that achieving peace will be her government’s first priority.

For all the attempts to present a united front, as negotiations progress the aspirations of different ethnic armed groups will inevitably be a source of new division. The United Wa State Army, which sent low-level delegates to observe the conference after pointedly refusing to participate in the government’s ceasefire negotiations, is pressing for a separate state that includes the northern Shan administrative centre of Lashio. Pa-O, Ta’ang and Tai Leng representatives made similar calls for their own communities. Shan Nationalities League for Democracy spokesman Sai Leik, perhaps mindful of the fact that any successful statehood claim would reduce Shan territory, was quoted by the Shan Herald Agency for News as saying said the push was contrary to the spirit of the Panglong Agreement.

There are some indications that more serious divisions have emerged. Last month, the Ta’ang National Liberation Army, which was excluded by the government from signing the ceasefire accord, alleged that a militia aligned with the Restoration Council of Shan State cooperated with the Tatmadaw in an offensive against TNLA positions near the Chinese border. The RCSS denied the allegations at a meeting brokered by the Nationwide Ceasefire Coordinating Team, the already fragile ethnic negotiating bloc that was split down the middle by the October accord.

Time will tell if this was an isolated incident, but it bodes poorly for the peace conferences to come. A shared hatred of the Tatmadaw has forged many alliances of convenience over the decades, but differences cannot be set aside forever.

Deciding the future of the ‘Karen Revolution’

The coup has exposed fractures in the Karen National Union, with high-ranking members publicly disagreeing on how involved the group should be in anti-military resistance. An upcoming congress could determine the direction of one of Myanmar’s most influential ethnic armed groups.
BY Frontier