Living wage or a race to the bottom?

Industry resistance to a proposed K3,600 minimum daily wage lays bare the cut-throat nature of the global garment trade, where costs are borne by those least able to afford them.

Just under a year ago, 22-year-old Naw Tin Zar Hlaing arrived in Yangon’s bustling Hlaing Tharyar industrial zone in search of work. She wasn’t choosy. Factory work, she says, is a step up from farming.

Zilun, her hometown in the Ayeyarwady Delta, is less than 80 miles from where she now lives. Like tens of thousands before her, she reasoned that a relatively well-paid, steady, and indoor job was a better alternative to toiling in the paddy fields. After four months, her sister, Naw Thandar Aung, 27, joined her – partly out of concern for the safety of Naw Tin Zar Hlaing, who found herself alone in Yangon’s sprawling industrial underbelly.

“It wasn’t easy to find work,” Naw Tin Zar Hlaing said. “I had to go from factory to factory, door-to-door.” Six weeks after her arrival, and almost ready to call it quits, she found a suitable job in a factory that makes backpacks. With luck, she managed to help her older sister secure a position at the same factory.

The sisters work roughly 10-hour days – including overtime – from Monday to Saturday and take home about K100,000 a month each. They send half their earnings to Zilun to support their parents and younger brother. Their earnings are typical of manufacturing jobs in Hlaing Tharyar, but although they are making ends meet, getting by day-to-day is a struggle.

“If we spend money on anything except for the absolute basics, we will not be able to provide for our families,” said Naw Thandar Aung. “We don’t spend much on food, and we buy new clothes very rarely.”

Manufacturing jobs like the sisters’ are still relatively scarce in an economy dominated by agriculture and the extractive industries. The government is keen to expand the country’s industrial base to create much-needed diversification and formal employment.

Garments are a significant source of foreign currency earnings, accounting for 10 percent of all export revenues in 2012. Jacob Clere, project manager at the Myanmar Garment Manufacturers’ Association, the sector’s main industry lobby, said there are an estimated 230,000 people employed at MGMA-affiliated factories, with perhaps 100,000 more working in other garment making businesses nationwide. Those figures do not include the factory where the sisters work because backpacks are categorised as ‘accessories’, not garments.

The legal hodgepodge that regulates Myanmar’s labour market is in desperate need of streamlining and updating. In March 2013, parliament passed a minimum wage law, prompting the formation of an implementation committee comprised of government officials, industry representatives and labour rights advocates.

How much to pay, however, has been a huge point of contention. On June 25, the committee proposed a nationwide minimum wage of K3,600 (US$3.20), prompting a backlash from both sides. Labour activists demanded a minimum of K4,000 (US$3.55), while MGMA members – many of whom are from South Korea, China, Taiwan and Japan– have maintained that anything more than a base wage of K2,500 (US$2.20) would threaten the viability of their businesses. All parties have a 60-day window to provide formal feedback before the rate is set.

Myanmar garment factory owners are threatening to close their businesses if the minimum wage is raised to K3,600 per day. (Ann Wang / Frontier)

Bottom of the barrel

The competitiveness of Myanmar’s garment industry lags behind neighbouring countries. Transportation and logistics are an expensive hassle. Because the electricity supply is unreliable, factories need to invest in costly diesel generators. Manufacturing equipment is outdated and rents have soared due to rampant land speculation. With all these external forces putting pressure on factory owners, it is perhaps no surprise their cost-cutting strategies have revolved around the one factor firmly under their control: how much they pay their workers.

“Every time we negotiate a contract, [customers] complain that China, Cambodia and Vietnam [can do it cheaper],” said Daw Moh Moh Lwin, the co-owner of Golden Jasmine Intimates Manufacturing International in Hlaing Tharyar industrial zone. “We cannot compete with Bangladesh. They’re very cheap.”

The notoriously low wages paid to Bangladeshi workers are only part of the problem. Most of Myanmar’s garment production is of the “cut-make-pack” variety, industry parlance for contract work where inputs, such as fabric, are sourced overseas and factories assemble the final product.

The other prevalent production model worldwide is known as “free-on-board”, under which contracted factories are responsible for the entire production process. Daw Moh Moh Lwin claims that where she would charge US$0.50 for the labour to cut, make and pack, factories in Bangladesh that weave their own fabric can produce a comparable finished product for $2.

“Bangladesh can produce raw materials, so they have that competitive advantage,” she said. “It’s a far reach until Myanmar can build a factory that can also produce fabrics.”

Daw Moh Moh Lwin pays trainee workers a pittance – K60,000 (US$53) – for their first month of service, a sum that has been adopted as an industry-wide standard, although workers at the top end of the pay scale earn K150,000 (US$132), including overtime. Daw Moh Moh Lwin said she provides her workers with free accommodation at an offsite dormitory and three meals a day, which helps them cut down their living costs – an uncommon, but not unheard of, practice.

Failing to pay a living wage because the industry suffers from structural shortcomings is not the answer, said Sean Turnell, an expert on Myanmar’s economy at Macquarie University in Sydney.
“A K3,600 daily wage is payable by all but the producers at the absolute bottom of the industry,” Dr Turnell said. “In short, the companies offer Myanmar very little in terms of value adding or any sort of first step on the industrial ladder.”

The weakening kyat has driven up costs for workers; the International Monetary Fund says inflation is set to reach eight percent this year. Naw Thandar Aung and Naw Tin Zar Hlaing rent a single-room apartment on the outskirts of the industrial zone; their rent jumped from K42,000 to K45,000 (US$39.80) last month. The price of food, too, has steadily crept upward, they said.

Although a weaker currency should make Myanmar’s manufactured goods more competitive internationally, factory owners are also feeling the pinch, with capital goods – such as modern sewing machines – increasing in cost as the kyat falls.

Without investing in better equipment, however, labour productivity is going to stay low, said U Aung Lin, the chairman of the Myanmar Federation of Trade Unions, an advocacy and research group.

“What owners here do is use cheaper machines at the expense of people,” said U Aung Lin. “That’s not how it’s supposed to be,” he said, adding that factory owners lack transparency. “Give us details,” he said “What are your production costs? They should be able to tell us why [they are only willing to pay K2,500 a day].”

All talk, no walk

Despite the garment industry’s lingering shortcomings, conditions have improved markedly during the past few years, due in part to higher standards demanded by big international brands sourcing from Myanmar factories.

“When I first started, I used to work from eight in the morning until ten at night,” said Daw Min Min Latt, 31, who has worked in suburban Yangon factories since she was 16. In her current position as a trainer at a Chinese-owned garment factory, her monthly take-home pay of about K185,000 (US$164), including overtime, is significantly higher than the average at her workplace, which hovers at around K80,000 (US$71) a month.

Rumours have circulated at her factory that if the K3,600 minimum wage is approved, it may not necessarily result in more income. “At first I was happy to hear that wages might increase, but from what I’ve heard, bonuses will be cut. So if you calculate it, it will be about the same,” Daw Min Min Latt said.

The bonus system used by factories could do with some streamlining, says U Thurein Aung, the chairman of Action Labour Rights, an organisation that conducts research on rights violations and teaches workers how to effectively fight for their rights.

“In the garment sector, the pay system is confused and complicated,” said U Thurein Aung. “Employees don’t know what they’re [entitled to]. For example, there are often separate bonuses for overtime that are separate from overtime pay; if workers do not do overtime, they will not get this bonus,” he said, adding that overtime is optional, by law, and such bonuses compel workers to do work they otherwise would not want to because their base salary is not enough to live on.

In 2012, labour unions – and strikes – became legal for the first time in decades, a development that has allowed workers to advocate more effectively on their own behalf. Still, union organisers routinely face harassment by employers, said U Aung Lin, and township-level dispute resolution councils are biased towards factory owners.

Organised labour in Myanmar is rather disorganised. There are about 1,200 labour unions throughout the country, but most function at the workplace level, making it difficult for the labour movement to advocate for better protection at the national level. The government is also conspicuously silent when it comes to labour disputes, U Aung Lin says, particularly when foreign investors are involved, which is often the case in the garment industry.

Because her capacity as a trainer straddles the divide between owners and employees, Daw Min Min Latt acknowledges that both sides have grievances that will need to be addressed through improved transparency.

“It’s a question of pragmatism,” Daw Min Min Latt said. “Factory owners need to know what factory workers need. But I want to stress that I don’t want to see many protests. There needs to be give-and-take between both sides.”

Because foreign garment manufacturers have made significant investments in Myanmar, she believes the doomsday scenario of shuttered factories and destitute employees postulated by the MGMA is unlikely to become a reality.

“The factory owners came here to make a profit – if there were no profits to be made, they wouldn’t be here,” Daw Min Min Latt said. “I don’t think they’re going to shut down.” 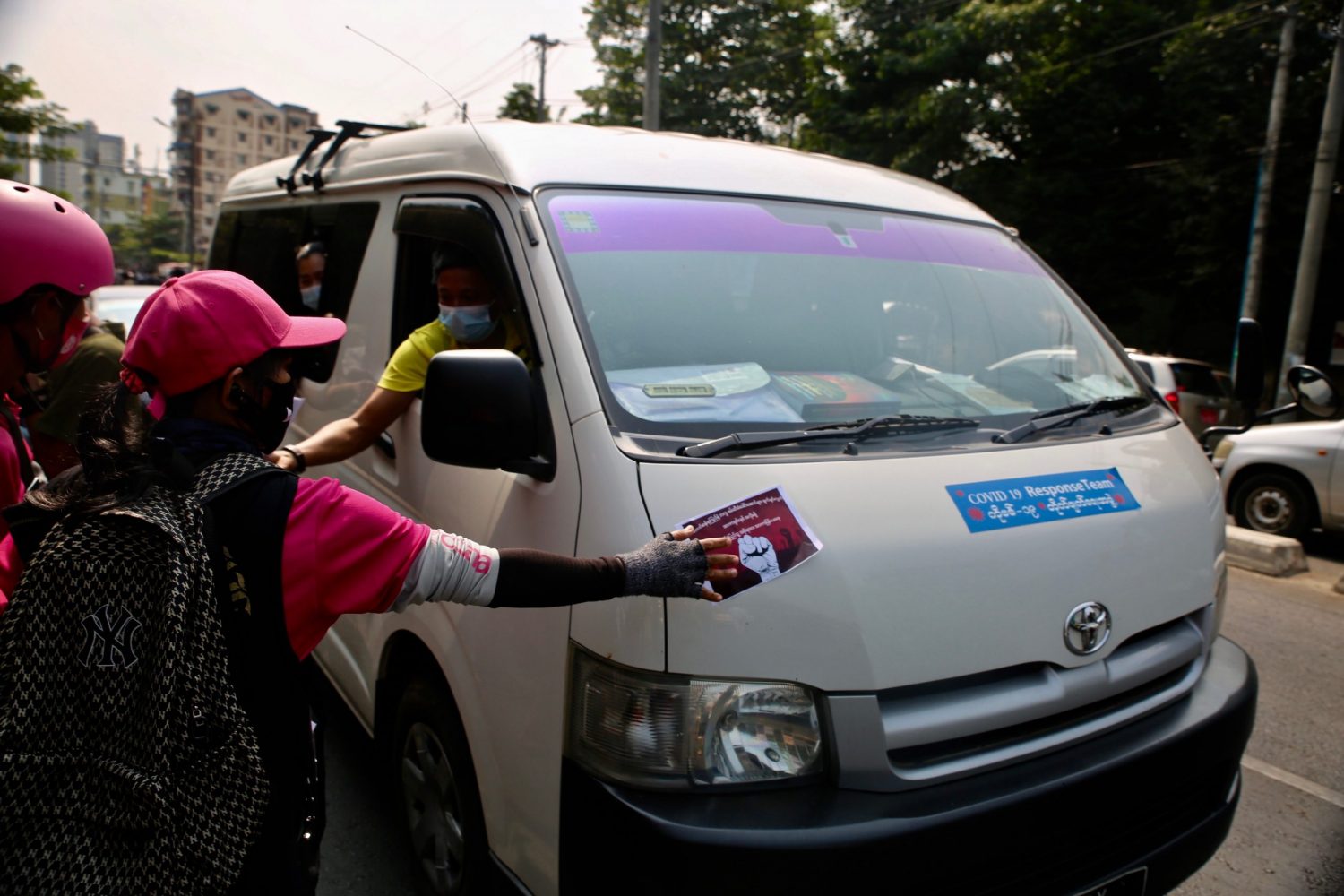